You are on the [Sweden] page of folder [Background Research]

Letters from Sweden (from Deborah in Stockholm)

the number of vaccinated people dying with covid-19 in Sweden is increasing. Between 124 September, seven out of ten of the covid-related deaths were people vaccinated with two doses, according to figures from the Swedish Public Health Agency. The median age of the fully vaccinated who have died since 1 July is 86 years old. read more

I watched the press conference on Thursday, it was Tegnell looking very tan and relaxed. The journalists were back in person, not spaced out, no masks. The 2 issues seem to be unvaxxed workers at care homes (the idea of mandated vaccines and vax passports has completely lost steam here), and possible boosters. read more

much to my surprise, given previous signalling from Tegnell, Sweden will go ahead with vaccinations for the 12-15 age group. Enter a feisty journalist, who challenged the statement that "20 million children" have received the vaccine worldwide and they have lots of cost-benefit data:

"The only places the use of masks has been required are healthcare environments: hospitals, clinics, etc. They were recommended" on public transport, first during rush hours and then all the time, but that recommendation fell away earlier this summer." read more

"....good news today! We are getting rid of most of our outstanding restrictions and recommendations - no limits on public gatherings, no limits on the number of people at tables in restaurants, and it is time for people to get back to their offices. They talk about lifting further restrictions in step 5 (the final step), but the only thing that comes to mind are border controls, which seem more political than anything. C19 is a disease we must learn to live with. A reminder: no vaxports here and this will make the case for them even weaker..." read more

Tegnell, when pressed about vaccine mandates/passports: we do not divide society by vaccination status for any other vaccine and we wont do it for this one. We have seen how divisive this is in other European countries.

But the government this week: we are considering them for large concerts and certain professions - so, as has often been the case, the health authority and government are at odds. read more

"The numbers here are creeping up, but are still relatively low (The smart epidemiologists on Twitter are saying Delta peaks after 5 weeks, I think Sweden is 2 weeks away). No region is reporting a strain on health care. There is an extremely high level of vaccine uptake among the over 50s (90%) which drops off in the younger age groups... 20% of ICU patients have been vaccinated....Re vaccines for 12-15 year olds - the Health Authority says no, rates of side effects are too high; vaccine passports - also a firm no; boosters - we havent seen a need...
On a political level the sitting government has asked to extend the authorization to implement emergency pandemic measures for an additional 4 months past September 30th - and could not get support in parliament! " read more

"Once a journalist asked Tegnell if domestic vaccine passports would be a possibility, and Tegnell said NO. He said if cases go up again, we would work together as a community to try to bring them down." read more

"All is well here, most of our light restrictions and recommendations have been lifted now. And not a whiff of domestic vaccine passports. Our case rate is 30/100,000, below the 50/100,000 where Tegnell said the crisis would be over." read more

Tegnell said when our numbers get under 50/100,000, it will be extremely unlikely you will get sick. We are almost there. read more

Rates plummeting but "the Public Health Authority extended their guidance to "stay apart, avoid new contacts", and "work from home" until end of September" read more

Deborah's comments re an April 19, 2021 piece in the Lancet, re Sweden read more

Vaccination rates and opening up for larger events read more

Wondering how the numbers in the news line up with Deborah's own experience. read more

Including a vacation trip, and returning to Sweden read more

The other says thank you for keeping your distance - this has been the health authority's central message.

Will there be some thoughtful analysis now that hard data is available to back up different strategies? I am glad that the Swedish approach can serve as a counter-narrative.

Important to remember in Sweden: no lockdowns, kids at school, no mask mandates, restaurants, gyms and shops open, open border, no quarantine hotels, much more social mixing.I am so happy when I am out and I see kids running around with their friends, at the park, hanging around the shops, just being kids

The herd-immunity concept is so poorly understood. Our chief epidemiologist used the term at the beginning of the outbreak, that we should shelter the vulnerable & elderly and let everyone else get on with life, and this will have the effect of dampening the spread over time, thereby protecting the elderly. But then international condemnation kicked in, and now he doesnt dare say this. Our care homes did get hit hard at the beginning (as they did everywhere), and we had to sharpen routines but the situation has been considered under control since the spring. This has been used against Sweden again and again, as has our relatively high mortality compared to Finland and Norway. Yet our excess mortality has been zero, or very low, all winter.

I must say that the view from Sweden looking outward, is that there is mass hysteria. I traveled to twice outside of the country during the pandemic and decided I would prefer to stay in low key Sweden and not travel again until the situation outside of Sweden is calmer. And I say this even as my husband was very sick with covid in March last year - I understand how serious the virus can be for certain demographics in society.

But youve seen the data on distribution of covid deaths in Sweden - about 100 deaths in people under age 50, out of 12,000 deaths in total.

Life here is quiet, but feels fairly normal. Children have remained in school the whole time, shops, hair salons, spas, gyms, are all open with capacity restrictions, restaurants are open, with some illogical restrictions (no alcohol after 8, and now suddenly they are required to close at 8:30. I think people were ordering lots of drinks right before 8 and staying late). There is no mask law, and very few people were wearing them. Now suddenly in Stockholm, we are told they are recommended - first on public transportation, where the uptake was about 10%, and now they say all the time, and there is more use, perhaps 25%?. 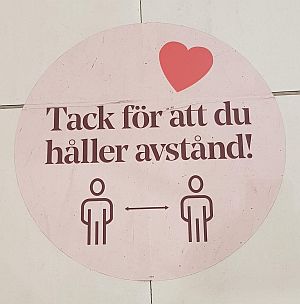 thank you for keeping your distance

This is a political decision of the local government, not a scientific one. Our chief epidemiologist has consistently said they have very limited usefulness, there is little data to support them, and it is more important to stay apart. And a large Danish study came out confirming they have limited usefulness. When asked about these new local recommendations yesterday at a press conference, he confirmed they have limited usefulness, aside from reminding people we are still in a pandemic! But there is some truth to this - many people dont care about the pandemic anymore. People are out, the sun is shining. Our numbers are coming down, the hospitals are busy but not overwhelmed, the elderly have been vaccinated and so there are few deaths now, time to move on with life

So a warning: you will start to see headlines like Sweden reverses stance on masks, admits defeat, blah, blah, but that is not really true. As a practical matter, no one needs to wear one, it is just a recommendation, which most people will ignore.

Our borders are open to people coming from countries that allow us, in turn, to travel there. If you are non-resident you need a negative PCR test to enter. If you are a resident returning from certain countries (UK, Brazil, South Africa), you are recommended to test on arrival, again after 5 days, and stay home for 7. But these are recommendations - no law enforcement. Our chief epidemiologist has said cross border infections account for a very very small amount - something I saw confirmed in the Canadian press, even though they will implement draconian hotel quarantines? Again, politics over science.

Big venues like concert halls and movie theatres have been allowed to stay open with limited numbers (perhaps 30? I cant remember), and so many of them have chosen to close. I thought Id go to the movies this weekend - but no good movies out! A retro movie house is doing good business by offering a dine-in option - movie plus dinner and drinks - taking advantage of more space in the theatre. They are booked solid, people are desperate for something to do.

The government gave universities the option of holding in person or on-line classes and they opted for on-line. So my son has spent the last year of university on-line. He does get to the gym, and he sees his friends, they can go out for a pint, but still, I feel like there was a little bit of laziness in the decision, I think they could have made things work, perhaps not in big lecture theatres, but could have held smaller tutorials, even occasionally. Young people need connection!

What doesnt get discussed enough in the foreign media is that we have very little social unrest, very limited infringement on civil liberties. The biggest area of complaint is the restaurants closing early - every Monday(?) restaurant owners take to the streets to bang pots in protest.

Our policies have been fairly consistent from the beginning, no lockdowns, no children in/out of school. We were told we had to prepare for a long haul, we had to have policies we could live with for a long time.

2. At the beginning of the pandemic, care homes for the elderly were closed to visitors, while the situation was brought under control. The sharpened routines were better hygiene, better training of staff, fewer staff interacting with each patient, that type of thing. But then a decision was made when the pandemic waned late spring, to allow visitors, as the mental health effects of not allowing visitors was considered a worse health risk than the virus. Elderly who have had both their shots are free to meet people as they choose, and hug their grandchildren. The situation concerning the unvaccinated is less clear to me - I believe each care facility has discretion. Hospitals are quite strict here as well. A friends mother was in the ICU (not covid) and he couldnt visit her until the very end of her life, when it was clear she wouldnt recover.

3. Interesting data on Swedish schools remaining open: basically, there have been less infections among children than seasonal flu; no deaths of the 1.8 million children aged 1-15 who remained in daycare or school.

A zoom call with Deborah. It sounds like despite the fact that up to the day of our call Sweden has somewhat fewer covid deaths per million than most other EU countries, Swedish media generally follow the broader international media consensus: that the handling of the pandemic in Sweden has been a shameful disaster. Deborah said that the amount of bullying on twitter seems very similar to that in other countries as well (mostly name-calling), with some tweets saying that Anders Tegnell ought to be brought before the international court of justice for genocide.