You are on the [cover page] of folder [Law, Policy and Liability]

Liability - The ghost in the room

In years of interacting with the City, CELOS researchers have noticed, particularly within the Parks, Forestry and Recreation department, that there is often a preocupation with liability and legal issues in fashioning and interpreting policy and procedures.

We aren't lawyers and we are not qualified to offer legal advice or conclusions. Rather, we have researched some laws and policies concerning public space as a response to issues that have arisen at Dufferin Grove and other city parks and city rinks. We want to inform ourselves about what the laws say so that our public discussions can be more fruitful. We want to share the information we have and continue to correct any errors or misunderstandings about how the laws which affect public space work.

Our experiences with law and policy in parks and public spaces

Over the last several years, laws and policies, and the ways they are understood or interpreted, have affected our parks and public spaces in a number of different ways.

For example, citizens and groups carrying out innovative projects or experiments may run afoul of laws that are designed for other contexts. This has happened, for example, to stall the building the Dufferin Park Bio Toilet. The cob structure designed to house the toilet, is to be built by the community using cob (similar to adobe). The provincial Building Code is one of the laws which sets requirements and standards for building conventional buildings. However, it has no provisions concerning building with cob: dufferinpark.ca/cobcourtyard/wiki/wiki.php?n=CompostingToiletProject.FrontPage. What to do?

Laws can be misinterpreted or misunderstood

In other instances, the way the law is understood or interpreted by civil servants may be incomplete or inaccurate, as was the experience when all campfire permits in Dufferin Grove Park were suddenly cancelled in 2007. Read More http://www.dufferinpark.ca/problems/wiki/wiki.php/Problems2007.CampfirePermissionRemoved

The distinction between law (laws are made by elected officials acting on our behalf) and policy-making (policies and guidelines are not legally enforceable unless they have been made law by our elected officials) is another area that is often subject to confusion and misunderstanding. The essential issue is who has the authority to direct citizens about what they can and cannot do in their parks and public spaces. For example, a law making bicycle helmets mandatory for all people under 18 was enacted by our provincially elected representatives after years of public hearings and debate. However, non-elected civil servants from the City of Toronto have assumed the same power to make helmets mandatory at city rinks across the city, with no public involvement. Read More http://www.celos.ca/wiki/wiki.php?n=Liability.HelmetPolicyWorkingNotes

CELOS enlarged its project of "law literacy" again when park playgrounds began going through another stage of equipment removal last summer, in this case the citywide removal of half the swings on older swing frames. The reason was a concern that standards set by a manufacturers' group required the same compliance as if they were law. The City calls them "playground enhancements" and plans to spend almost $14 million on new playground equipment over the next 10 years. It is certainly a financial boon for the playground industry, but is it really an improvement? And which areas of the city are getting the new stuff? Read more >> http://dufferinpark.ca/cityplaygrounds/playgrounds.html#playgroundremoval

Actions that seem uncomplicated from an administrative point of view, like the policy of removing half the swings on playgrounds to space them more widely, can have quite unhappy effects on park users. There is a sudden scarcity of swings. The children become anxious and argumentative, there are lineups for swings and frustration for parents, and a visit to the playground becomes a contest rather than a pleasure. CELOS discovered that there is no legal requirement to remove existing swings before there is money to replace them. We also found out, with the help of yet another piece of legislation -- the Freedom of Information and Protection of Privacy Act -- that there has never been a swing collision that resulted in an injury claim against the City of Toronto. This kind of information helps administrative staff to be more relaxed and more responsive. Swings were put back into some of the playgrounds. This may seem like a small thing, but for CELOS, and for the kids who swing, and for the parents who catch up on neighborhood news while they're pushing their kids on the swings, it was highly gratifying. 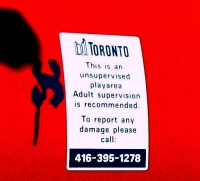 Two freedom of information requests, two responses three and a half years apart. The numbers don't match up at all -- puzzling. But the second, more detailed response shows that eight out of ten playground injury claims against the City were due to maintenance problems. It's the hypothetical DESIGN liability that caused the City to tear out so much playground equipment, but it's the broken swings and collapsing frames that resulted in claims. Read more >>

This By-law was cited in a playground injury claim against the City of Toronto, for failure to maintain the equipment in proper working order. It suggests a duty by the Parks maintenance staff to keep public assets in good repair. Read More >>

The Occupational Health and Safety Act: 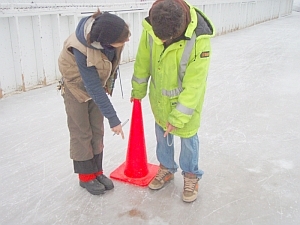 About the Occupiers Liability Act (OLA) and patronoccupier liability

Includes a list of some case law that may be relevant to the City's obligations in parks and public space. One ice rinks case.

Occupiers liability is the law that governs that person A may sue person B if A is injured while on Bs property.

Here are some clauses in the City of Toronto Act 2006 which emphasize the importance of creative work that people do to make the City a lively, interesting place to be. 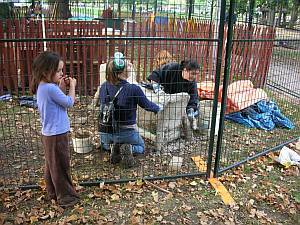 What The Judges Wrote

Freedom of speech, freedom of information