On The Road cover page

You are on the [cover page] of folder [On The Road]

Accounts of people we meet or who send us links to their work.

My Friends of Colour Improvising Life -- a film by Eric Schachter and Cristina Henao Cifuentes, with Spanish narration. CELOS member Anna Bekerman translated the text, and sent a summary and some quotes, just enough to give a sense of this "lyrical and opinionated" film of life in Riverside Park in Harlem.

"It took me just one afternoon to realise that I was still alive, and that I hadn't forgotten that. Just one afternoon in Harlem, in Riverside Park." The narrator describes how one day she found herself in Riverside Park when a torrential downpour suddenly opened up. Instead of running for cover or hurrying home like most of the people in the park, she decided to stay where she was. She found that many people had stayed despite the rain, delighting in small pleasures and improvising ways of passing the time with what they had. She grabbed her video camera and began recording the scenes that we see in the movie: "Surprising images amidst a vast cement jungle. So close and yet so removed from the grey city landscape. Here, in place of heavy suitcases, there are light-spirited games. Instead of serious debates, jokes and anecdotes. Instead of the same routine, a map open to any destination."

In August 2010 while visiting friends in Rio de Janeiro, Brazil I had a number of conversations with Henrique Pio, a local writer and cultural producer. We shared ideas around the importance of the arts in promoting healthy communities and in due course we had developed a concept for a community art project for the favelas in Rio.

With assistance from the touring office of the Ontario Arts Council (International Residencies), I am returning to Rio de Janeiro to help develop the supports necessary for the establishment of a community arts projects in the citys the under-served neighbourhoods.

In these on the road reports I will be:
*Observing how things get done in the favela, keeping in mind economist Elenor Ostroms theories on governance of the commons

Yo Utano and Anna Bekerman in Brooklyn

Report by guest baker Yo Utano.

Somehow the guest baker project went international, and I found myself in a park in Brooklyn, New York. One day last fall Jutta Mason came across an oven while riding around Prospect Park on her bike (it is bigger than our High Park). Anna Bekerman, a long time baker at Dufferin Grove who is in Brooklyn at the moment, visited Lefferts Historic House to which the oven belonged and together with the staff there, planned a baking day. I took an overnight bus to join them. 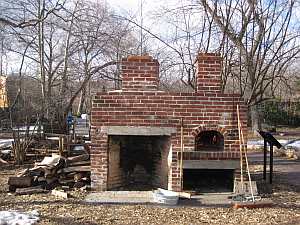 Anna, her little baby Alice and I met Elyse, Billy and Margaret on a windy Saturday afternoon to preheat the oven. The oven comes with two parts: a baking chamber and a hearth fireplace, next to each other. Just the sight of it excited me.

While the fire was on, we sat in the kids room of the house and exchanged our knowledge and experiences. Lefferts House runs educational programs on the way of life of both natives and early settlers in the area. For Billy and Elyse, food is at the center of education, and so the oven was built. School groups and visitors learn how lives were lived there in the early days from the gardens (including grains and flax for fiber!), the oven, hearth and other cooking equipment, as well as from the museum inside.

Mayssan Shuja, Anna Bekerman, Jutta Mason: To Cambridge to speak to the Rotary Club, in response to an e-mail from Joy O'Donnell:

I am currently the President of the Cambridge North Rotary Club and I had been told about your Bake Ovens awhile ago. I have shared your website with a number of people in our club and we are thinking about doing something similar in the Rotary Dumfries Park on Hespeler Road in Cambridge. I was wondering if you had someone available in your group that would be willing to come to Cambridge for a free lunch and speak to our group about how the Bake ovens operate at the Dufferin Grove Park. If so would they be available to come on Wednesday, November 26th at 12:00pm to the 20 Hobson Street Restaurant. I hope we can take a great idea and duplicate it in our community.

This trip was expensive: gas plus two $15 meals (since we were only offered one meal for free). The restaurant was large and elegant, the meal was small but tasty. $15 bought a portion of pasta primavera and a cup of coffee. There were 47 Rotarians and their friends at the lunch. They told us they meet every Wednesday. Some are retired, some not. More men than women, but lots of women too. They spoke about a successful fund-raising to build two houses in Bolivia. Joy gave a little history -- Rotary was established, she said, in Chicago during the time when the city was pretty crooked, by four businessmen who wanted to combine business and honesty (and good works). 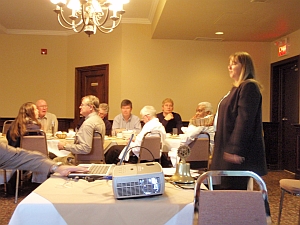 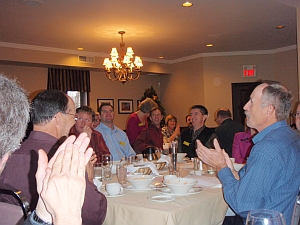 applause for the houses

Anna had prepared a slide show and she and Jutta presented it for about 20 minutes. It seems unlikely that the Rotarians will proceed with this -- their park has no running water and no building.

The town (formerly called Galt) is stunningly beautiful along the river, with many graceful limestone buildings and bridges.

Kitchener: After the Rotary Club presentation, Anna, Mayssan and Jutta went up to Kitchener to see the Working Centre, in particular the cafe and the bake oven. One of the centre's long-time supporters and collaborators, Ken Westhues, had sent us an essay he wrote about producerism, published in the Working Centre newsletter ten years ago. The paper is full of interest, and the Working Centre is as active as a beehive.

The bake oven is beautifully made, only too small, and somewhat out of the way. 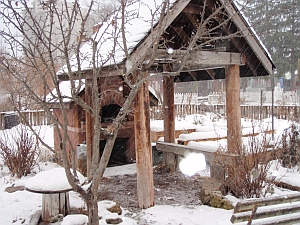 The oven in the snow 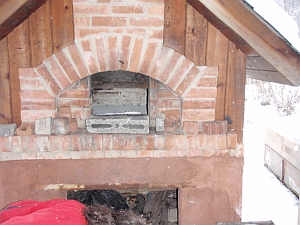