Time: 7.30 pm near the bake oven, or in the Rink House in case of rain. From organizer Andrew Munger: Chris is a very engaging speaker and will be discussing issues of interest to our community. From park friend and California ex-pat Matt Price: Chris is an awesome force -- it's great to have him coming here, people should really be excited about him. He's also the force behind Processed World, for those of you who remember that, and a huge raft of other stuff in San Francisco. 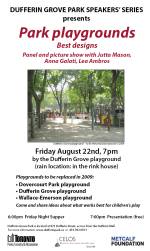 HOW TO BUILD PLAYGROUNDS WHERE KIDS LOVE TO PLAY. Location: near the pizza oven. Rain location: in the rink house.

In the summer of 2000, the Toronto school boards tore out 172 playgrounds.

Around the same time, provincially-funded daycares removed many of their best structures. And the City government began a $6 million playground safety project that resulted in the replacement of 49 park playgrounds and the removal of swings, climbers, and other play pieces in hundreds of other park playgrounds. Many parents objected, saying that the new plastic playgrounds and replacement pieces were dull and dumbed down. 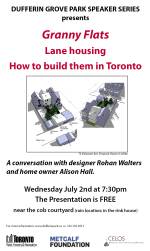 Granny Flats: How to build them in Toronto, with architect Rohan Walters, home owner Alison Hall and city planner Elise Hug. Location: near the cob courtyard. Rain location: in the rink house.

The provincial government explicitly allows granny flats  small buildings at the back of a property where an elderly or challenged relative could live near enough for family assistance, but self-enclosed for independence. But the citys planning department generally refuses permission. That was the case when Alison Hall commissioned a design for a granny flat where her garage is, on Delaware, so that her mother could live there and get help when she needs it. Local architect Rohan Walters designed a modest and attractive flat on the same footprint as the garage, but it was still a no go. This third speakers series conversation will address how to change the citys no to yes, for people in the neighbourhood who are getting old or whose parents are old, and who want an alternative to institutions. There will be a display of blueprints and existing flats. The presentation will be about 20 minutes; the rest is conversation. See www.readingt.readingcities.com

In August (date still undetermined), the Speakers Series conversation #4 will be about how the pattern language of architect and master builder Christopher Alexander works for parks. More information: www.dufferinpark.ca.

The Star No room for 'granny flats'

Andrew says "Chris is a very engaging speaker and will be discussing issues of interest to our community."

Copies of "Nowtopia" will be available for purchase.

For more information about "Nowtopia" follow the link below. 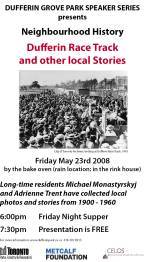 By the pizza oven (in the rink house in bad weather). This session will show the research of CELOS worker Michael Monastyrskyj, who has been gathering local history pictures and articles on this area. The presentation focuses on the economic history of the Wallace railway triangle lands and Dundas and Bloor Streets, plus old maps and photos of the park, and of the surrounding neighbourhood. All presentations are limited to 20 minutes in length  the rest is conversation.