You are on the [cover page] of folder [Thorncliffe Park]

My experience (by Claire Freeman-Fawcett, August 2009) 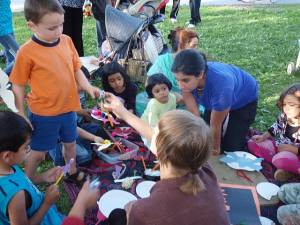 doing arts and crafts with kids

For the past few Fridays, I, along with other members Centre for Research into Public Space (CELOS), have been going up to the Thorncliffe Park neighbourhood to assist in community park programming run by the Thorncliffe Womens Committee.

Thorncliffe Park, located in what used to be East York, is a densely populated area to say the least. It began as a planned community for approximately 12,000 and now is home to over 25,000. Physically Thorncliffe Park is comprised of a cluster of high-rise apartment buildings forming a rough semi-circle around a common area that consists of a school a mall, parking lots and a small, derelict looking park called R.V.Burgess Park.

The first time I went to Thorncliffe, I was not sure what to expect. I had learned that much of the population was comprised of newly arrived immigrants, many of them from Pakistan, India, Iran, Afghanistan and the Philippines; that there was a small, over-crowded and underdeveloped park; and that there was a womans group that was trying to host a weekly Friday evening community event part of which included a child-friendly show. Amy Sutherland, a member of the Thorncliffe Park womens committee, had approached CELOS to consult about doing something in R.V.Burgess Park together. It was a good opportunity for me to see how public space was being used in other areas of the city.

So off we went. The first Friday there was going to be a science show for kids, so we decided to try doing some simple kids science activities (baking soda and vinegar, balancing an egg with salt; nothing too fancy). We drove up the Don Valley and arrived at Thorncliffe. Amy met us. We helped her carry tables to set up in the park. Along with the science show, the womens committee was raising funds for the playground by renting tables for a community bazaar.

I had expected the park to be packed, but when we arrived around 4:30, there were just a few kids on the swings and some people sitting on benches in the far corner. The park has a concrete splash pad which consists of a few painted metal structures that, presumably, emit jets of water when turned on. As soon as we began setting up tables, a young boy, who was maybe 8 years old approached us, and said that his mother wanted him to reserve a table for her from which to sell her wares at the bazaar. We pointed him in the direction of Amy, who explained that the tables had already been reserved, and told him to let his mother know that she should contact them in advance next time if she wanted a table.

At about 5:30 we were ready with our kids science station. Being a humanities student (philosophy) I felt a bit silly doing science demos and trying to explain the theory behind them, but I soon realized that the kids did not care. By about quarter to six, our science station was descended upon by dozens of children with varying degrees of English proficiency, all scrambling to try the experiments and not really bothering too much with our scientific explanations.

This first Friday, there were so many eager children and I was so busy trying to watch that kids did not throw eggs at each other, or spill the dish-soap, or attempt an unsupervised experiment with baking soda and vinegar, that I did not have much time to look around. One thing that I did notice, though, was that the kids were very thirsty. We had brought a large container filled with tap water to use for hand washing and cleaning up, but many of the children eagerly requested sips of water. The splash-pad was turned off because of the City Municipal Workers Strike, but there was a water fountain not far away. Why dont you go have a drink at the fountain? I asked a young boy who was coming back for his third helping of water. That water fountain doesnt work. It has been broken for a long time, he told me. I looked around. In this slightly dingy little park that served as green space for thousands of people, surrounded by parking lots and apartment buildings, it seemed preposterous that there would be absolutely no access to water of any kind. 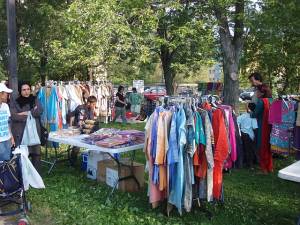 saris for sale at the bazaar

The next few Fridays we decided to do arts and crafts with the kids, which for us is a bit more hands-off than actively performing science experiments for them. That meant that I had more of an opportunity to look around and observe what goes on. The bazaar gets progressively more crowded between the hours of 6:00pm and 9:00pm. Each week when we arrive around 4:30 to begin setup the park is almost empty. By six oclock it gets crowded and by closing at nine oclock, the park is absolutely full of people. The enormous school yard, which opens into the park, and is filled with portable classrooms, becomes so full by nine that it looks like a school day at recess. The vendors themselves are mainly women, although there are some men. The first few weeks they were mainly selling cloth items: saris, bed sheets, dresses, and fabric. Some women were selling food they had prepared at home. This trend has stayed mostly the same over the weeks, except that the last few times there seem to have been more vendors selling food. This past Friday, there was a man selling Mars bars, someone selling knock off designer kids clothes, someone selling peacock feathers, a table selling shampoo and toiletry items along with several food tables selling a range of home made dishes from pakoras and samosas to cupcakes and french fries.

While the adults shop and mingle, the kids seem avid for any sort of programming we are willing to offer. They furiously paint and decorate paper plates and glue pipe cleaners to things. There is surprisingly little bickering despite the fact that by the end of the evening we are inevitably short of supplies and not everyone is able to put sequins on their art. This Friday, after telling some latecomers that we were all out of things on which to paint, I turned my back only to discover ten minutes later that the paper holder and table had been decorated with muddy green, red and brown paint. The parents are very encouraging. They tell us that this is so nice for the children. 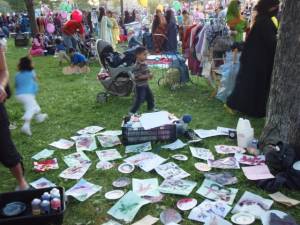 There is something very life-affirming about these Fridays. For the Thorncliffe Womens Committee, this is an experiment, a way to foster community and help people enjoy the park as well as a way for their organization to make a little money to reinvest in the community. There are difficulties, to be sure. There are tensions that arise when people who are not selling at a table, skip the program table fee by selling on a blanket on the grass. There is the basic task of borrowing tables from different offices at Thorncliffe and finding a place to store them over night when the offices are closed. But, at nine in the evening when we are about ready to pack up, and I look around and see so many people enjoying themselves, talking, laughing and gossiping in many languages, and making purchases while their kids are covered in paint and glue, I feel tremendously happy to be there. It is an on-going process of figuring things out that I feel privileged to witness and participate in.