You are on the [cover page] of folder [The Justice System]

This part of the website is about criminal and regulatory offences as well as civil cases that concern us. 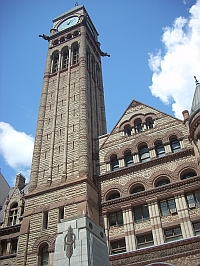 The CELOS Court Project is an effort to understand the court system from the perspective of ordinary citizens who have no legal training. Our intention is to promote a more informed discussion about the judicial system as it plays out in our neighbourhood, and see what happens. Since February 2008, our group has been following court cases that started with arrests in the neighbourhoods near Dufferin Grove. We learn about arrests in the following ways: from news releases issued by the Toronto Police Service; from media reports; from messages posted to local e-mail discussion groups; from youth in Dufferin Grove Park; and at bail court, by chance, from coming across neighbourhood residents in detention.

CELOS workers then follow these cases through court, bringing the stories back into our community (while respecting publication bans). High on our list is publishing judges' decision, which are often of far more scope and interest than media stories. We're also assembling a library of media stories about the courts. Courts page 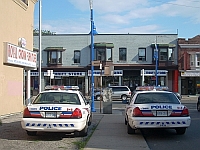 On September 20, 2005, CELOS requested the following information through the Freedom of Information Act: (1) all Police Occurrence Reports relating to the park from January 2002 to October 2005; (2) all arrest reports from the park for the same period; and (3) all documented reports of citizen/police contacts in the park during the same period. It was understood that names and identifying details would be blanked out. The police service has its own separate Freedom of Information Unit, which responded promptly. On December 5, 2005, CELOS received a package of photocopied reports, with all identifiers (even age and gender) blanked out. However, about 1/3 of the reports had been omitted. CELOS researchers, after making their analysis, realized that they needed the remaining reports, which they assumed covered all the youth stops. Their request was granted and on April 2, 2008, the remaining reports were sent to them.

The analysis raises some important questions about policing and communities. CELOS is continuing its efforts to understand police procedures and documentation. See Police Freedom Of Information Correspondence