CELOS built a community centre without walls model in Ward 18 parks and documented the extensive staff/park user collaboration there for the ten years of its flowering. Park enthusiasts from across the city (and from other cities) came to Dufferin Grove Park, and continue to come, for many conversations. They experimented with some of our approaches in their own neighbourhoods, and influenced what we tried out as well. CELOS now wants research done on how the promising projects that were attempted  but were blocked  could get another chance by devising workable service contracts for park programs.

History: When food in parks runs into bureaucracy (CELOS deputation to City councillors, May 9, 2011

A community health centre and the residents of a newcomer area in Etobicoke have been trying to get permission to add a bake oven to their centrally located park since 2007. They were told various things:
- that a policy on bake ovens would be released in 2008
- that the Christie bake oven had burned down (this did not happen) and so the city had decided not to allow any more bake ovens in parks
- that they should hold a public meeting (this was held)
- that bake ovens would be decided on a case by case basis
--and back around again, that a policy was on the way.
read more 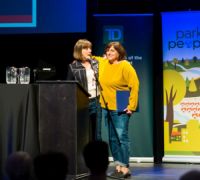 "I want you to know that were being aggressive in our pursuit of a modern, innovative system that will transform our business and the way we work together. Were working to implement tools that are digital, that offer online and user-focused solutions, and that can continue to evolve and grow as technology advances. We want to ensure that were not left with an outdated system in ten years, but rather that we implement a cycle of continuous improvement and innovation that puts us among the most effective and leading government services"....read more

It's hard for ordinary people in Toronto to get a handle on how much money the city government has available to spend on parks, to keep things in good repair and make improvements. Sometimes it seems like there's a lot of money available and other times it seems like very little can be spared. An example is R.V. Burgess Park in in the Thorncliffe Park region. read more

Partnerships and conservancies: an unfamiliar approach

On April 9, 2018, the Parks and Environment Committee of city council listed two agenda items related to parks being run partly by new bodies. The parks are Edwards Gardens and Allan Gardens. There was no discussion of either plan, only mutual congratulations between city management, councillors, and external partners, who had evidently all been working together for quite a while to draw up these plans -- in the case of Edwards Gardens, for seven years -- Read more

2019 Capital budget appendix 1b: Additional 2018 and 2017 and Prior Year Carry­ Forward Funding Requests By Project

Back to front page