Toronto food strategy deputation at the Board of Health meeting, City Hall, Monday May 9 2011. Given by Jutta Mason. 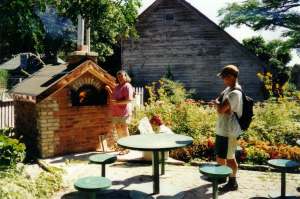 These excellent goals are still being blocked in city parks and community centres. Last week, an incident happened that made me decide to come and depute here. Our group, the Centre for Local Research into Public Space, has been working on a guest baker project with the help of a grant from the Ontario Trillium Foundation. One of the Dufferin Grove bakers has been arranging an invitation to every public bake oven in the city  there are eight  and doing a baking there, together with the neighbourhood bakers and city staff. One of the ovens is at Riverdale Farm.

But then we heard that there might be a problem with the oven chimney that would not allow the oven to be used. Last Thursday I stopped by there to have a look and take some pictures. The in-charge staff person, who was aware of my own involvement with park bake ovens, ordered me off the property, saying the farm was closed and therefore I could not come in the ten feet distance to take my photo, even though she was standing right there. I did not appreciate being treated like that. 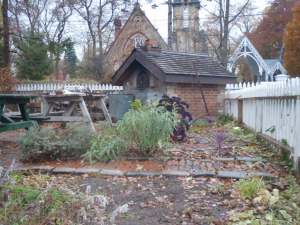 We have subsequently heard that the Riverdale oven might be available for use on May 17 after all. Great! But it was a strong reminder of the many blocks that are currently put up against community food arrangements in parks and in recreation centres, and against the partnerships that have supported them. Citizens are at risk of being treated like pesky interlopers instead of full, valued partners in enlivening public space. 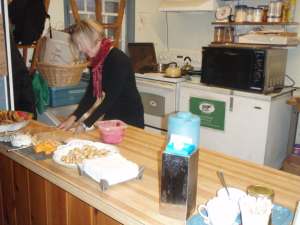 Some examples: In the case of Riverdale Farm, Elizabeth Harris called me last November to ask for my help, saying that Riverdale staff had taken the oven key away from her and that the park staff seemed to be making it as hard as possible for baking to succeed at the Riverdale oven, placing restrictions on the use of the kitchen as well as the oven. She said she felt frustrated and humiliated by the many barriers erected by staff. This has been going on for years. 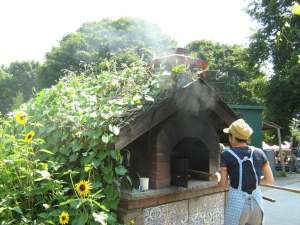 People sometimes come to Dufferin Grove Park and say they want to build an oven in their neighbourhood park too. Easier said than done! An example: a community health centre and the residents of a newcomer area in Etobicoke have been trying to get permission to add a bake oven to their centrally located park since 2007. They were told various things:
- that a policy on bake ovens would be released in 2008
- that the Christie bake oven had burned down (this did not happen) and so the city had decided not to allow any more bake ovens in parks
- that they should hold a public meeting (this was held)
- that bake ovens would be decided on a case by case basis
--and back around again, that a policy was on the way.

Two bake oven policy drafts have been written by city staff, but with minimal consultation with people who actually run bake ovens. Our efforts to meet with the city as a group have been unsuccessful, and so  four years later  there is still a moratorium on the community food activities that can take place around bake ovens, such as these kinds of fun things: 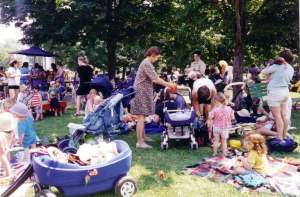 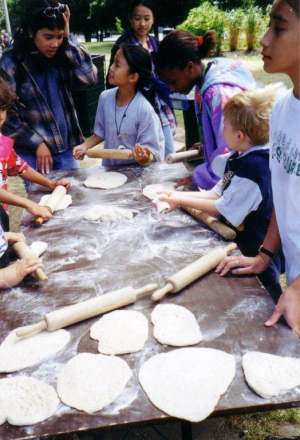 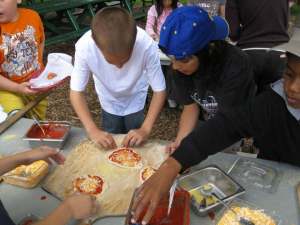 The latest word is that community standards officers are too busy with developing the new service plans for their Division, to make any progress on the bake oven policy. 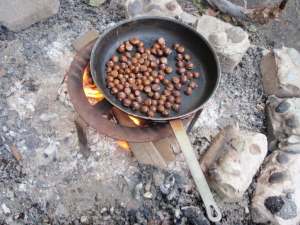 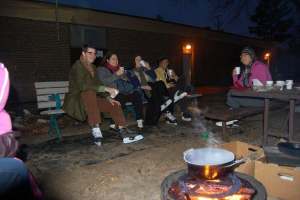 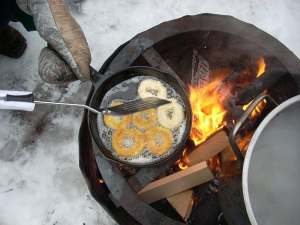 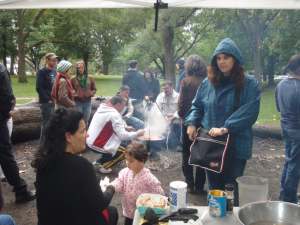 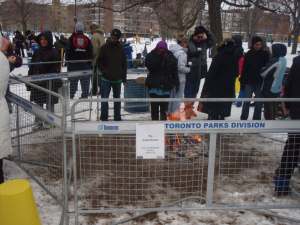 But there have been lots of blocks here too. In January of 2007, after 13 years of cooking fires at Dufferin Grove and many other parks citywide, all such campfires were cancelled. It took 217 e-mails to get them back. They were restored two months later, but with several additional layers of bureaucracy. Even when allowed, some front-line Parks staff treat community cooking fires as a problem. In the east end, community groups were told last week that the city does not permit cooking over an open fire (such fires are permitted). At Thorncliffe Park last February, their request to have their customary campfire at their winter festival produced this result:

Reports from all over the city say that getting permission for cooking fires is often frustrating and mysterious. Parks staff seem to be confused themselves. The silos between Parks staff and Recreation staff also undermine the possibilities of collaboration between community people and city staff. 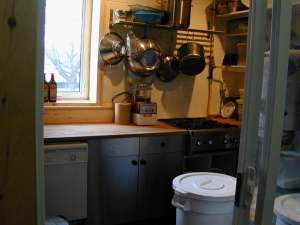 So if cooking fires are discouraged, what about using the many community kitchens that have been put into community recreation centres over the years? Heres the Dufferin Rink kitchen , which gets a huge amount of use through a close partnership between community people and city recreation staff. Riverdale kitchen is operated with restrictions but still gets a lot of use. But elsewhere we have been told that community kitchens are not available to residents, for example this new kitchen at the Jenner Jean-Marie community centre [Thorncliffe Park], the well-equipped kitchen at the North Toronto Community Memorial Community Centre, and other kitchens in other city community centres. 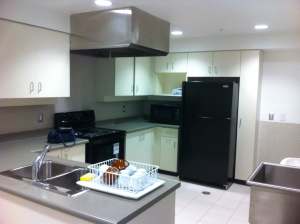 Keeping the community from forming partnerships with city staff to make good use of existing community kitchens is a waste of existing resources, of kitchens that already exist. What a shame. When such facilities are used creatively, they may provide another funding source, NOT user fees, for example here at the Wallace Rink and here at Dufferin Grove Park over $50,000 was brought in by voluntary contributions for food last year, all of which allowed more programs. 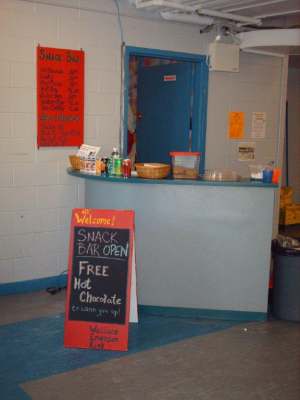 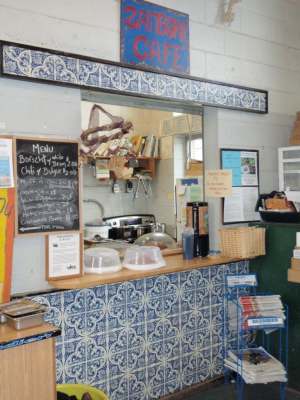 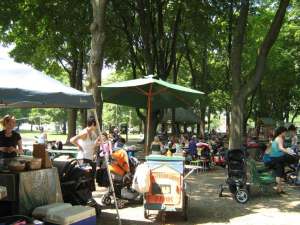 Many of the excellent principles brought out in the Food Strategy can be applied now, without endless waiting for new policies written by city hall policy writers. Whats needed is a renewed spirit of collaboration between front-line city staff and neighbourhoods, and a definition of partnerships which welcomes every community approach. Were so close to having this  but frontline staff need the nod from upper management to say that creative collaboration is allowed, not discouraged.

Id like to propose an opportunity right now to take a step for food and partnership in a public space: Thorncliffe Parks tandoor oven, as seen here. Last fall, some of the women of the Thorncliffe Park Women's Committee built a temporary tandoor of clay, inside a barrel. With city permission, they tried it out at R.V.Burgess Park. It was a hit, but it didn't last long. Now the women's committee would like to locate a more solid pre-fab tandoor, bought from a supplier in Oakville, in the park. 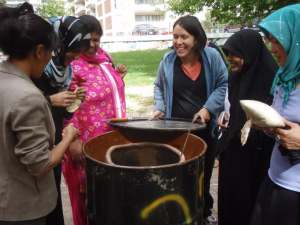 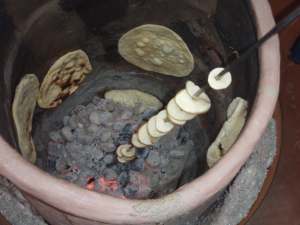 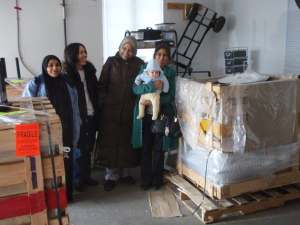 The city's approval of such an oven, in time for the park bazaar the opens on the last Friday of May, will be a sign that things are looking up for food strategy in Toronto.