Hello Jutta,   I have gathered the information to your questions from our staff. Here are the responses:   Riverdale bake oven: This oven was built by Friends of Riverdale Farm in 2001. I've heard that volunteers there are now required to stand right by the oven for the whole time the wood is burning (i.e. for hours).%

1. Is this true?
The oven was built by City of Toronto staff.

2. If so, what's it based on?
The Pizza oven is located beneath a large Tree, and it is within 3 feet of 10 picnic tables, that are quite frequently fully occupied with parents and small children. Leaving the oven unsupervised would create a safety issue as it is in a highly populated picnic area within the farm. [EH:] "There is no heat on the outside of the oven and it is easy to put a sign up and rope it up.  It is not dangerously close to trees."

Three years ago the oven was left burning and unattended by Friends of Riverdale Farm.  In the evening, a fire ignited and Toronto Fire was called by our security guard.  The City repaired the damages caused by the fire. This of course could have been very serious in a Farm setting. The Fire Department worked with PFR staff to reinforce the importance of having a trained person watching the oven.  The practice has continued to be reinforced ever since that time, for anyone using the oven. [EH:] "On April 29 2003 the oven was left to burn overnight by a wood fire oven baker who said it would be safe and the cedar shingle roof caught fire in the night.  The roof was repaired December 2003 and extra insulation was added to the outside of the vault.  The city and the Friends of Riverdale Farm shared the cost of the repair. The oven is never left to burn at night. Nothing was said by the fire department about supervising the oven and the TFD inspected the oven and found it safe." 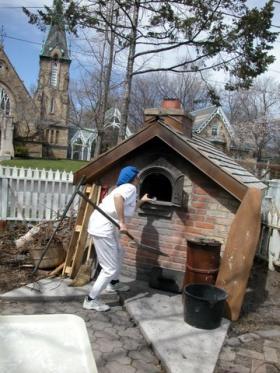 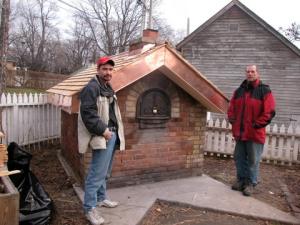 3. Does recreation staff do programming with this oven? Or only volunteers?
Recreation staff have programmed the bake oven primarily with Summer Camps. In this year's programming, we are expanding the use of the oven by staff and for the community. Volunteers, primarily connected with FRF, use the oven. [EH:] "FRF staff and volunteers use the oven and all FRF staff and volunteers are covered by our insurance policy. No Camp staff have been trained on oven use for several years.  FRF staff has run the oven for the Parks staff.  Of course there was no activity at the oven in 2009 because of the strike."

5. If a permit is needed, what is the cost and what are the rules?
Not applicable at this time.

6. How often was the Riverdale oven used in 2009?
FRF used the oven April through October every Saturday & Sunday exclusively 9am - 4pm.
FRF also used the oven on Tuesday Market Days 9:00 am - 6:30 pm, May 12 to Oct 31.
FRF also used the oven an additional 15 - 20 times as "one-off's" during normal farm operating hours.
Due to the Labour Disruption summer use by staff in 2009 did not occur. [E.H.] "Since 2001 Riverdale Farm Oven has been used twice a week. We have been somewhat limited by staff telling the baking group they could not light before 10A.M. this winter. The camp groups trained by FRF have used the oven for pizza in the summer. This was limited last summer by the strike and by smog warnings other summers. We have had requests from community groups but are hampered by the farm's early closing."

Alexandra Park bake-oven: This oven is the only one built under the direction of Capital Projects (in 2003 or 2004, I think it cost the city $16,000, I might misremember). It was not built correctly and so it's hard to use. Questions:

1. is there a plan to fix this oven so the hearth size corresponds to a community oven?
Staff is currently looking at this issue.

2. Do City Rec staff do programming with this oven?
The last programming Recreation staff did was a skateboarding event in 2008.

3. Do Scadding staff do programming? If so, do they have to get a permit?
The oven was built for food access programs at Scadding - they do not require a permit.

4. If a permit is needed, what is the cost and what are the rules?
Not applicable at this time.

5. How often was the Alexandra oven used in 2009?
I am waiting to hear back from Scadding, but I will follow up with you. [Comment from Scadding Court Community Centre staff Krista Fry]: "The oven has been used less than six times. Parks and Rec used it for one event. A community group used it for one event, no permit but an orientation with me. I have not used it much as I am too busy with other programs, its functionality is poor and I don't have quality volunteers to manage it with me."

Christie Pits bake oven: this oven was built in 2000, with funds from the Maytree Foundation and from Dufferin Grove "cookie money" plus the joint labour of rec staff and volunteers. Questions:

1& 6. What was the cost of Rec staffing for this oven in 2009? How often was the Christie oven used in 2009?
Staff rates vary.
One staff worked an average of 6 hours for each of the 9 events over Spring, Summer, and Fall for Friend Special Events.
Two staff worked an average of 8 hours each day for day camps (16 days over 4 weeks of camps).   2. Did the funds for Rec staffing come out of the Ward 19 Rec budget (Kim Brown) or from somewhere else?
All pizza oven costs for staff are within district budget. Technical adjustments are done yearly to ensure costs are charged to the right accounts.   3. What was the 2009 partnership agreement (formal or informal) between FCPP and the City?
Agreement between PF&R and Friends of Christie Pitts for Oven - we work with them to allow them to do several special events around the pizza oven each year; PF&R pays for the staffing costs to operate the oven and the Friends group provides the food and wood to operate the stove and collects the money from participants to cover the costs of the food.

4&5. What was the income from direct Rec programming, i.e. school or day camp visits, in 2009? If that income went into the general city funds, was an equivalent amount put toward Rec staffing of the bake oven?
All revenue went to cover food costs.

As you know, currently all Dufferin Grove oven programs are run by Rec staff. Because much of the food for food programs at the park is cooked in the ovens, the two Dufferin Grove ovens are used approximately 168 days a year. Any additional programming (e.g. the upcoming Matzah bake) is an in-park collaboration between park users, Rec staff and CELOS, without involvement by Permits. Park users are not charged for kitchen use as part of any such collaboration, since the kitchen was built as a community kitchen and no significant extra staff time is required to support park users working there.

Drop-in pizza-making programs -- the $2.50 per person donation for pizza days covers all the materials but doesn't quite cover all the staff. CELOS does the accounting for the pizza donations and also adds one staff. The other rec staff is engaged in community introductions, play setup, etc., as well as helping with the food and making sure that public health guidelines are followed. Rec staff also take in the cash, part of the time.
Questions:

1. How would city cash handling procedures alter the pizza day program?
It would be a drop-in program with a consumable fee similar to our cooking classes.

2. What plans, if any, are there for involving Permits in the use of the ovens for collaborative programs like the Matzah Bake? Permits are not used for bake ovens. The Matzah Bake Group would need to apply for a picnic permit and be charged an extra cost for staff time needed to operate the oven.

3. Since Recreation is currently required to apply for permit approval from Parks (for programming located in parks) are there plans to require Rec staff to apply to Parks for a permit to use the Dufferin Grove ovens for Rec programming?
Recreation staff deliver the program using the oven. There is no permitting currently.

1. What is the status of PFR's draft bake oven policy? I.e.  is it still being worked on, and if so by whom? If the policy is still being worked on, what are the plans for stakeholder and neighbourhood consultation? Dates? Format?
There is a preliminary draft being worked led by Kevin Bowser and plans for it to be rolled in with the Toronto Food Strategy. Revisions have been made, but staff are currently working on it. There are few groups that are interested in bake ovens in parks, but none have been in contact. Kevin Bowser will follow up and provide more information. Once I receive it, I will forward it to you.

2. What is the status of existing requests from other neighbourhoods to build bake ovens in other parks (i.e. at Bell Manor and at Sorauren Park)?
Regarding Sorauren Park, no request was formalized. Community groups need to work with local Recreation Supervisors to determine the need of a bake oven and how best it would be used in their community.
Regarding Bell Manor Park, the Councillor did have a community meeting regarding the installation of a permanent bake oven and the general consensus of the constituents that showed up were more interested in spending money in lighting improvements etc. [Comment from Julia Graham, Stonegate Health Centre]: "Community residents at the meeting also brought up issues they had with the park while both the park supervisor and councillor were there  noting security issues and residents wanting lighting in the park. They did not say they were more interested in lighting but that this was something they also wanted. The bake oven idea was highly welcomed."
[Note: please see "Stonegate chronology" attachment]

3. Is PFR involved in any bake oven proposals or plans at any other locations citywide?
No plans are in the works. Factors such as the daily usage, staffing, permitting, and supervision of the bake oven have to be factored in.