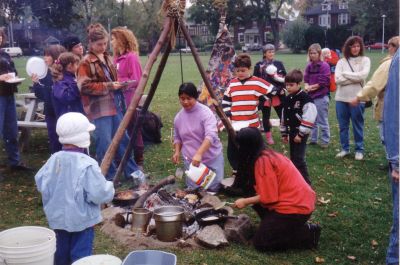 In 1993, a group of neighbours who live near Dufferin Grove Park had the first community campfire at the park. It was a breakfast cookout. Isabel Perez, a Guatamalan friend, brought her daughters to help cook. Isabel is Mayan and was used to cooking all kinds of foods over the fire, since her family didn't even get a gas stove until Isabel was a young woman.

The year after, Isabel started cooking over campfires with school classes at the park's adventure playground. She showed how to mix up tortillas, but she also made pasta and donuts with the park visitors in the summer. A short film, a slide show, and a booklet demonstrate how these programs are run. 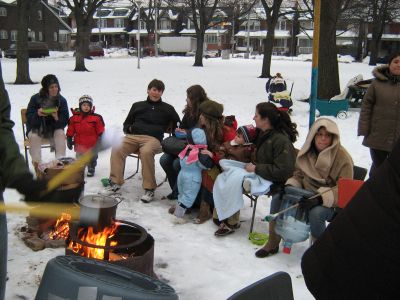 In the years that followed, campfires became a very popular activity at Dufferin Grove Park, both in winter and in summer. Some of them are part of larger community events involving storytelling or music performances, or show-and-tell cooking sessions from various cultures. 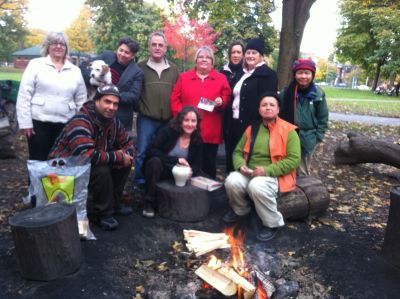 friends and family remembering a grandmother

Many of the campfires are just gatherings of family or friends, celebrating a happy occasion or -- sometimes -- memorializing someone who is gone.

In 2013, there were 472 campfires at Dufferin Grove Park. The people who host the campfires are called "campfire volunteers" because they and their groups contribute to the safety of the park ("eyes on the park") as well as adding the beauty of fire and the warming evidence of friendly sociability. Many campfires welcome drop-in visitors.

In 1998, the staff of Native Child and Family Services came to visit the park, to explore the idea of holding a pow wow there. They said they were attracted by the park's campfire program, since fire would be an important part of the pow wow. The following year, the first pow wow took place. There were children's activities as well as the drumming and dancing, and lots of vendor tables selling aboriginal goods from South and Central America as well as North America.

There was lots of food, but none of it was prepared over a campfire. The agency staff said they were worried about the danger to participants, especially kids, cooking over a fire, and besides, the point of their campfire was that it was a sacred fire, not meant for cooking. 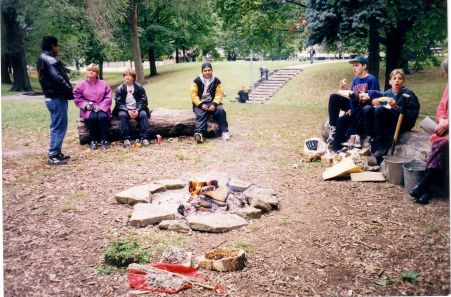 The agency has run a pow wow every year since 1999. The campfire, located at the park's main campfire site, begins at dawn, with an elder doing a ceremony. There are fire keepers assigned to take turns minding the fire all day long. The pow wow is very popular and well-attended, but since the main part of the event is some distance away, on the soccer field, the campfire usually has only a few people sitting by the fire.

Also, the agency has no local relationship with the park besides their big once-a-year event. Participants joke about the park being "Indian land" but they don't have time to make their presence felt the rest of the year. That's too bad.

There are quite a few other First Nations people who use the park, though, including some under-housed people who sometimes stay overnight. Sometimes they have a campfire, and they seem to enjoy it a lot.

In an effort to try out a show-and-tell First Nations cooking campfire open to the community, we got a bit of park funding to try it as a three-day pilot. We asked Natasha Akiwenzie to take the lead, along with Mary Jane Young, a CELOS board member who also comes from the area near Cape Croker where Natasha and her family live.

Natasha has been at Dufferin Grove Park often, since her husband Andrew Akiwenzie is a fisherman and a popular vendor at the Dufferin Grove farmers' market. Natasha and Andrew have a long-standing, active interest in good food, and they run a food stand on the Cape Croker Reserve as well as selling fresh and smoked fish at a number of farmers' markets.

In the second week of March 2014, at the start of March break with the outdoor ice rink still open, Natasha tried out some First Nations recipes, with help from Mary Jane Young and park staff Mayssan Shuja Uddin. She and Mayssan built the fire beside the rink during the farmers' market. They used Mary Jane's old Northern recipe books, making bannock and scones and Indian pudding, some wild rice too. The day was sunny but cold, with a north wind blowing through the campfire site. Natasha and Mayssan set up a wind block - to protect both the fire and folks sitting around the site. Still, the fire took a long time to catch. To speed things up, they started another fire in the small bake oven nearby, to create hot coals for a second pan at the campfire. The fold-out tables were set up for all the ingredients, and for spreading out the recipes. The ingredients were mostly things already available from the park kitchen, except for one thing -- bear meat! So that dish didn't happen, this time. The campfire site, with the wind block Jutta and Natasha by the set-up table Mary Jane and Natasha stirred up a batch of Bannock - which Natasha calls 'scons' (not to be confused with SCONES! which are culturally very different) or Indian bread. Here's the recipe:

Mix dry ingredients together, then add water quickly and continue to stir. A neighbourhood drop-in centre for newcomer youth, run by St. Christopher house, had also booked the campfire for that afternoon. Having Natasha try out different First Nations recipes meant there was lots to sample by the youth. March break kids skating got to join in the show-and-tell campfire cooking for those kids who are curious. Top of the Stove Cornbread : Ps 193 of Northern cook book Natasha and Jutta with Indian Pudding -- boiled for two hours! Put big pot of water to boil to later cook pudding in. Meantime: Mix flour in large bowl with baking powder, salt together with the shortening, raisins, currants, and all spice. Mix the molasses and sugars together in another bowl and then add to the first mixture. Put the works into a flour bag or sack and tie with a string. Boil for 5-6 hours - makes about ten servings

At 9am Natasha and Mayssan set out to meet with staff from three agencies that might be interested in such cookouts: the Native Friendship Centre, Native Child and Family Services, and St. Christopher's House Meeting Place.

They met with program coordinators at both the Friendship Centre (now called the Native Canadian Centre of Toronto) and the Meeting Place. At the Meeting Place, Mayssan ran into a few familiar faces, some of the homeless men and women that like to be at Dufferin Park in the summer (sometimes overnight). The staff said that a major barrier to participating for these folks was cost - so Mayssan left some TTC tokens, in case anyone wanted to come to the Saturday campfire in spite of the cold weather.

Natasha and Mayssan were unable to meet with anyone at Native Child and Family Services -- the receptionist said the coordinator had received the campfire fliers but wasn't around to talk to.

They came back to the rink around 1pm. A First Nations group (Four-Winds)from a downtown community health centre was there to meet them. It was also the first day of March break, so there were lots of kids at the rink, hungry to try out the recipes. keeping a lid on to capture more heat hot chocolate and scones and a sunny day

The Four-Winds group spent the whole sunny afternoon sitting on chairs by the campfire and talking (and laughing), and going back and forth to the rink. The campfire was even tougher to get going than the previous day -- less wind as well. So the bannock was hard to get right. Nobody seemed to care, though -- campfires are also made for conversation.

This was the day to show Natasha how use the smaller of the two park bake ovens, and for her to cook wild rice with vegetables over the campfire (with samples handed out to eager weekend rink users). Besides being the third day of a kind of a rehearsal, this was also the day for more detailed conversation: how to do some summertime baking sessions in the park's wood oven as well as over a campfire, with a First Nations cooking theme. There are two First Nations grass-roots groups who already use the park. One has a history theme and one has a youth/planting theme, and both would be invited to the cooking sessions, as a core to begin.