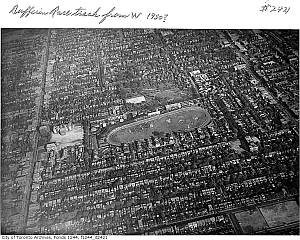 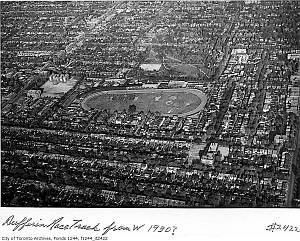 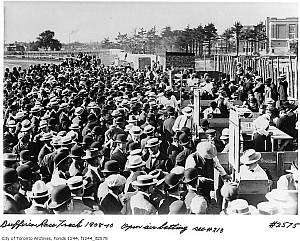 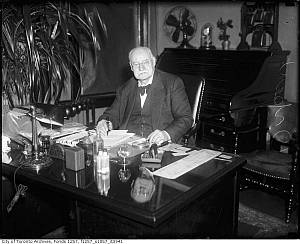 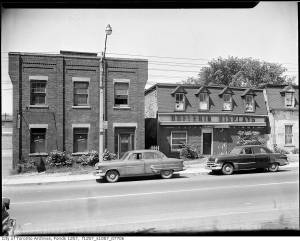 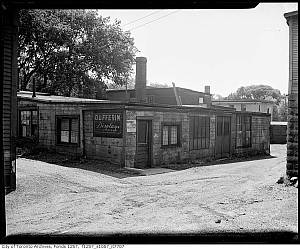 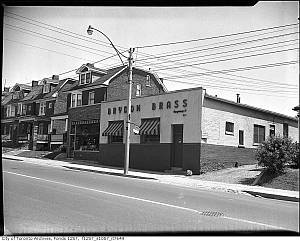 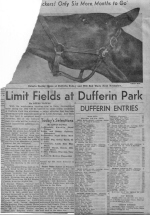 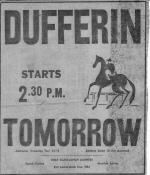 The Dufferin Mall across the street from Dufferin Grove Park was the Dufferin Park Racetrack until 1956. A friend of park staff Mario Lourenco discovered these clippings from the Globe and Mail from 1953 while taking up some linoleum flooring in his house. One clipping is Appas Tappas' picks for the season opening horse race. The other is an advert for the races. The ad features the track's "Superb Cuisine" and "Excellent Service" full course meals from 75cents!! Today 75 cents can still get you both excellent service and the superb cuisine of a mini-pizza at Dufferin Rink's Zamboni Cafe! 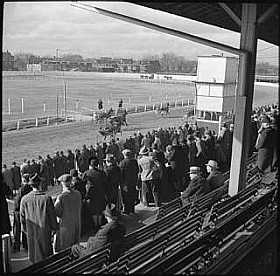 Before 1955, the Dufferin Mall was a popular horse racing track, called "Dufferin Park." When he was over 80, Rube Marcus, the owner of the famous rice-and-bean stand at St.Lawrence Market (downstairs in the south market building) told us that he used to go there a lot as a boy. He said that when he was 12, he figured out a great way to earn some money: he would buy a pound of peanuts for 10 cents and divide it up into 7 bags, which he sold at the racetrack for 5 cents each, on Saturdays in the winter. He said the bleachers weren't heated, and he used to stand over by the bookmaker's fire. The bookmaker always had a big campfire near the bleachers, and people would come over there to place bets and get warm. Rube said he sometimes made $2 or $3 a day.

The racetrack is gone but the campfire refuses to leave. It just migrated across the street to Dufferin Grove Park.

From: "Canadian Horseracing Hall of Fame 2008"

When Abram Michael (Abe) Orpen died on Sept. 22, 1937, a writer said, The man who built a shrine at the feet of Lady Luck, and successfully wooed the fickle maiden, as few have wooed her, is dead at age 83. Born in Toronto, Orpen was a colorful personality of an earlier era who had a flair for the flamboyant, and the gambling instinct to back it up. Founder of the Metropolitan Racing Association, he at one time owned Kenilworth racetrack in Windsor and Hillcrest, Dufferin and Long Branch tracks in Toronto. He also operated Queens Park in London in the 1930s. The son of an Irish immigrant, Orpen was associated with racetracks in one capacity or another for more than a half century. He ran the gamut of success from horse owner and bookmaker in the days before the introduction of pari-mutuel machines, to the managing directorship of three of the best known racing plants in Canada. He was also a philanthropist. During the Depression in the early 30s he paid for two meals a day for 500 men, maintaining a soup kitchen in the old Armouries and often picked up the tab for the funerals of race track associates.

He owned a small string of horses for a brief period, but built his first fortune on the earnings from his Alhambra Hotel, where poker, dice and bookmaking flourished. Orpen once said that keeping a book and writing a sheet for Toronto bookies in those days was not legal, and not quite illegal. He also operated a handbook for a time at Woodbine Park. On his gambling profits he branched out as a contractor, builder and brick manufacturer and later ventured into the mining and lumber business.

A man of considerable girth who weighed over 300 pounds, he was seldom seen by the general public at his tracks. At Kenilworth, where he held forth from 1917 until 1933, Uncle Abe was the silent master of all, scanning the crowds from a window in the racing secretarys office. It was Orpen who outbid tracks in New York and Chicago to stage the famous match race in 1920 at Kenilworth between Man o War and Triple Crown winner Sir Barton, who was owned by Canadas J.K.L. Ross. He put up a $75,000 purse and a $5,000 gold cup to lure the horses to Windsor. A crowd estimated at more than 30,000 bet over $220,000 on the race. Orpen also made the headlines shortly before his death when he reported that three men kidnapped him and stole a $1,500 diamond ring from his swank National Sporting Club on the Lakeshore. The National, one of many such clubs in Toronto, was a small version of a Las Vegas casino, with gambling games and chalkboards showing the results and prices at race tracks from all over the U.S.

His pearls of philosophy become known as Orpenisms, to wit: As long as small boys play marbles grown men will bet. He was generous to a fault towards those who were down on their luck. Hed often refund money to a gambler who couldnt afford the loss. But hed instruct his people not to allow the man to play again. He had a similar rule for employees at his tracks. Any man losing more money than he could afford would be discharged immediately. If anyone wants my opinion on betting, it is do not bet. But if you want to bet, well I will take the bet for you. Orpen disdained pomposity and never entered the section at Woodbine Park that was reserved for members of the Ontario Jockey Club. Hed sit in the public stands surrounded by his cronies. There was no members stand at any of his tracks.