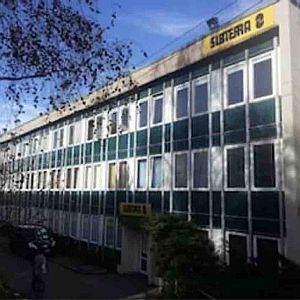 Gene says he met Colleen and her sister (both from Williams Lake, BC) almost 50 years ago as part of a Canada World Youth program, and they've stayed friends ever since.

Colleen has been living in Czech Republic for almost 30 years, mainly in Prague, now in a small place just outside of the city. A friend told her about a group of 74 Ukrainians (mostly women, and over 30 children) temporarily housed in a low-rise office building that was empty when the war started.

Colleen and her friend saw that these war refugees needed things that they could help to find for them -- food of course, but also a washing machine, showers, sinks for washing dishes, a better internet connection to stay in touch with the men back home, medications, and so on.

Colleen's sister Sandra set up a gofundme page here. They named it "Jar of honey." As of April 18, the page has collected over $11,000. There is also the option of doing e-transfers to Sandra: klassensw@yahoo.com. Sandra deposits those funds directly into Colleen's RBC account in Czechia.

Colleen says the gofundme donations are their nest egg for big expenses like the showers and the washing machines, dental emergencies, bulk food orders etc. The amounts deposited directly into her bank account can backstop the day-to-day food expenses. 74 people is a lot of people.

Colleen says she records every donation and every expense, in the interest of good record-keeping.

The 74 Ukrainian refugees your donations have been helping thank you from the bottoms of their hearts. They come from all walks of life; teachers, agronomists, students, stay-at-home mom's.........each had about thirty minutes to pack the absolute essentials before fleeing Ukraine, leaving fathers, sons, husbands, brothers, grandfathers behind to fight. In Prague, a friend's aunt and ten of her aunt's friends, all elderly women and entirely at their own expense, set up a nursery for 22 children under the age of three in the home of one of the organizers so that the mothers, all of whom have found jobs (albeit low-paying), can go to work knowing the children are being well tended to. These savvy ladies have also hired a full-time nurse for the children. What a demonstration of thoughtfulness, caring and support. We thought Jar of Honey funds might be needed there too but the ladies said, 'Thanks, but we've got this covered'. 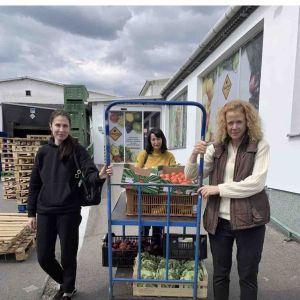 Zbraslav shelter refugees, Prague, with a large fresh food order purchased with Jar of Honey donations. It is startling how prudent they are with the funds. They feel the money must stretch as far as it can because they fear the war will continue for some time. This is no frills shopping ❤️

A mother and her adult daughter considered returning home to help only to learn Russia had heavily bombed their city and there is nothing to go home to at this time....

Just in from Colleen (Prague)

 one of the ladies here on Saturday said she knows of a woman in her home city who has refused to leave the war zone and is using her car to ferry anyone who needs transport out of the city. She picked up a young woman with three children but it turns out only one was hers and the other two are kids from the neighbourhood whose parents have been killed and have nobody else to take them in. Along the way they noticed a tiny girl sitting on the curb. The young woman shouted to the driver to stop and she went to the little girl who was clearly in deep trauma and barely able to speak. Her parents too had just been killed. The little girl's backpack thankfully contained all her documentation. Imagine as a parent or anyone in charge of a child having to take this precaution. So the two women, now with four children, drove out of the city and we hope, to safety 

I have to go in to Sedlcany (a bigger town six kms away) to withdraw cash from RBC to pay for shelter purchases as Kaca usually does the fresh food order each week online using her funds and then I pay her back from Jar of Honey. I also need cash to pay for appliances and vacuums etc etc as our friend Ivan (as he's in Prague) buys things with their own funds and I repay them from Jar of Honey money.

I am going to donate a little-used printer I have. Many of the children are now going to school and the mothers are looking for jobs so it makes sense to have a printer there.

Kaca (the friend I am working with on the Zbraslav shelter project) told me this morning that her 70+ year old aunt, along with ten of her friends, also in their 70's, has set up a nursery school for the Ukrainians and have taken in 22 kids so far so that their mothers can go out to work (and they've all got jobs). One of Kaca's aunt's friends has donated the ground floor of her house to house the nursery. Kaca told her aunt of the Jar of Honey for Ukraine saying we could help out if needed and the aunt said thanks but we've got it covered. This group of ladies have also had the foresight to hire a nurse to have on site for the children. Imagine all these seniors in that nursery with those little kids! There will be lots of stories but the fact these kids have a place to go while their moms go to work is a tremendous step forward.

Last night I had a call from Yulianna, a new arrival at the Zbraslav shelter. She speaks excellent English and a group of five will come to visit me here one day this weekend. It will be a chance to talk about what needs doing for the people at the shelter next.

I messaged Frantisek, the guy who has promised to install the double kitchen sink but have not heard back yet. He is aware how needed this infrastructure is and in my view ought to stay up 24 hours if it means getting that sink installed. But Kaca tells me not to 'get pushy'! But to know that there is only a hand basis-sized sink in that kitchen for 74 people has me worked up. It should have been installed in week #1.

Colleen asked the women in the shelter what they need, and this was their list:

From Jutta: "Gene gave me Colleen's phone number and we talked on April 9. On that day, Colleen had stopped at a village on her way into Prague, and bought boxes of fresh vegetables that the women had particularly asked for: "cabbage, carrots, potatoes, onions, garlic at a roadside stand that is there year-round. Also bought leeks." She paid with her debit card, and was able to stuff it all into her station wagon."

"I asked Colleen -- how do they manage to cook, in an office building? She said -- "the Czechs are grazers. Every office building has little kitchens in every department." So the women can heat food and make soups. But there were no washing machines nor showers, so Colleen and her friend bought that equipment and found a plumber who would do the plumbing to hook them up. Colleen said that the plumber was distressed at seeing all the children sitting out in the hallways, and wouldn't accept payment for his work."

There will be more updates on this page as Sandra sends them. In the meantime, here's a chance to help person-to-person, a connection that started at Dufferin Grove Park through Gene Threndyle and reaches all the way to Czech Republic and from there, to Ukraine.