Ontario has almost 15 million people and Sweden had just over 10 million. Easy to compare. Both places are in the north. Both are sparsely inhabited in their northern regions. Both have urban concentrations in their south. Both have welcomed immigrants and both rely on those immigrants to do a lot of the lower-paid jobs....

...but starting on April 7, 2021, until December 2021 -- as the numbers of seriously ill covid patients were still rising, then dropped in both places, and then began to be more or less level -- Ontario was consistently higher than Sweden in the numbers of ICU patients per 100,000 population. That's despite Ontario's long lockdown and slow opening, versus much more freedom in Sweden.

....Then at the end of November 2021, the omicron variant began to spread pretty well everywhere.

In both Ontario and Sweden, ICU numbers began to rise, followed within a few weeks by more deaths. During Christmas week, the graph looked like Sweden would once again pass Ontario in serious illness and deaths (with or of covid).
But that didn't happen. At the beginning of January, Ontario's ICU counts began to rise much more steeply than Sweden's. Deaths rose in both places. By mid-January, Sweden's ICU numbers had levelled off, and have continued at about the same level. Their deaths continued to rise. Buy the third week of January, Ontario ICU numbers were four times/100,000 those of Sweden. Finally at the end of January, Ontario ICUs began to release more patients that they were admitting. At the beginning of February, Ontario began to show fewer deaths than Sweden. It appears that Sweden may have got the Omicron wave slightly later than Ontario did.

The difference between both ICU admissions and covid-related deaths, in the two locations, is of course still very slight. The difference in what people are permitted to do -- Sweden dropped all covid restrictions on Feb.2 -- is, however, enormous. 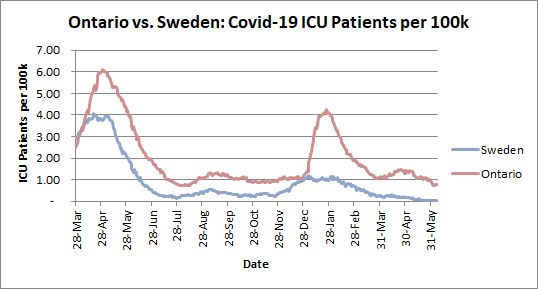