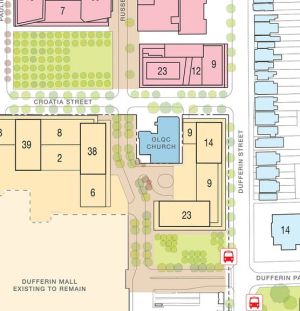 In early December the owners of the Dufferin Mall, the Primaris company, announced that theyd like to build some high rises too. According to Emily Paradis, posting on Erella Ganons dufferingrovefriends list, Primaris proposes to build up to four towers on the Dufferin Mall siteof the same height as the proposed buildings to the north at Dufferin and Bloor, which range from 11 to 39 storeys.

A few weeks after the mall announcement, two people came to the rink clubhouse to meet with this newsletter editor. They wanted to talk about the project, which is named Dufferin Grove Village. The people were: Matt Kingston, VP of Development for Primaris, a division of Toronto-based H&R REIT (stands for Real Estate Income Trust) which owns a lot of malls across Canada and the U.S. and some housing in the southern U.S.; and Eric Turcotte, a partner at Urban Strategies, the design company Primaris has hired. Urban Strategies is described as a Toronto-based global urban design and planning consultancy on its website.

Eric said he was at the big September 30 park meeting about whether to form a conservancy to run the park. Was he there to prepare for his work on the mall design? Maybe. But he also lives not far away (in a house, not a high rise) and has brought his kids to the park. (One of his colleagues at Urban Strategies is a member of the volunteer Community Resource Group that the city put together to talk about revitalizing the northwest corner. He lives near the park and brings his kids there.) Matt from Primaris said that hes lived in this neighborhood for two years, has often brought his little daughter to the playground, and loves seeing the old metal slides there.

The designers and developers of the high rises are not outsiders. Theyre the people who now live in this expensive neighbourhood. 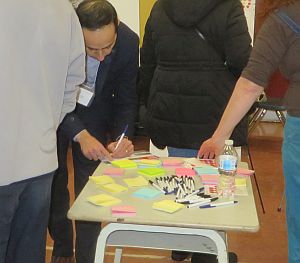 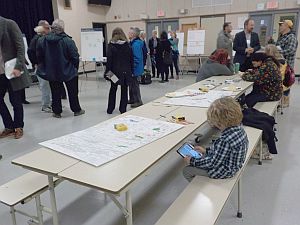 I just wanted to let you know that our Re-Zoning and OPA application to redevelop the surface parking lots, drive-through restaurants, and strip plaza that currently occupy the north end of the Dufferin Mall property was submitted this week.

I have included a few renderings from the application package.

The full application materials will be available shortly on the City of Torontos Application Information Centre (http://app.toronto.ca/DevelopmentApplications/associatedApplicationsList.do?action=init&folderRsn=4606000&isCofASearch=false&isTlabSearch=false), and will also be made available on the resources page of our project website (https://dufferingrovevillage.ca/the-site/)

We look forward to continuing the dialogue with the City, Councilor Bailão and the entire Community as the project continues to take shape.

Dufferin Mall has formally submitted an application to build four apartment towers on its parking lot. And the July 8 submission to the City Planning Department looks worse than we had hoped.

The massive apartment complex proposed will have a much bigger presence on Dufferin and Croatia Streets than many anticipated. On the west, overshadowing Brockton Stadium, will be a six storey retail and commercial complex. On the east, facing Dufferin Street, and replacing the existing fast-food stores, will be an eight story retail/commercial building.

For comparison, the tallest building at Bloor and Dufferin right now is the New Horizons Tower at just 15 stories. The mall towers will be matched with the 40-storey behemoths slated for the school lands.

Primaris Management, which owns Dufferin Mall, is a well-regarded manager and owner of shopping malls. (Dufferin Mall is one of the most profitable malls in the GTA.) Quadrangle and Urban Strategies have been involved in the building of a number of Toronto landmarks. Both should be ashamed of their squinted vision for Dufferin Mall, which will be a major addition to our community.

The massive six and eight story pedestal buildings proposed in their submission, hulk over Dufferin and Croatia Streets. There is no set-back to the pedestal buildings, no extra space for sidewalks and people.

Neither Primaris nor Urban Strategies wants such a desolate, cramped area. They well know that retail success for the businesses which will rent space along Dufferin and Croatia Streets will demand space for people to shop and dine and stroll.

The only reason developers make applications to build to the legal limit is to game the planning system.

Heres how the con works: a developer proposes building right to the limits of what is allowed: the community complains: developer agrees to a setback: and then claim they have listened to the community or city planning department so should be allowed to overbuild the property. The con works every time.

Dont believe me? Then believe what Urban Strategies wrote about Dufferin Commons.

Thats the name the Urban Strategies has attached to the patch of nature they have devoted to park space. Located at the entrance to Dufferin Mall, the park or commons is roughly the size of Michelis Garden centre, which sets up each spring to sell bedding plants. (There is no recognition that west-end Toronto is one of the most green-space deficient areas in the GTA.)

In its formal application for city permission to exceed our planning policies Urban Strategies admits the minuscule park space also lends itself (to) act as an improved transit-waiting area along the 29 Dufferin route.

Thats great: Instead of adding to our parkland well get a nice bus station. Well all be comfortable waiting for the Dufferin 29 bus: if it ever comes and isnt overcrowded due to the new condo and apartment developments.

Shouldnt the community have expected better from Primaris, Quadrangle and Urban Strategies?

But, why does the city approve these things? it irresponsible to allow this development, esp. given the problems outlined here, without building adequate infastructure - transit, schools - to support it. Shouldnt the community be expecting more from city admin.?

Someone please correct me if Im wrong but its my understanding that the 39 and 34 storey monsters have been a part of this mix from day one. I think we all appreciate that there is a need for higher density, not to mention a need for affordable housing, but the height of the taller bulidings are so far out of proportion to the surrounding neighbourhood except of course the proposed development to the north of Croatia Street that Im astonished that there hasnt been more discussion of this. Ana, I assume you read this forum: do you approve?

One suggestion Id like to see discussed is having what small part of the development allotted to park space be situated on a north-south strip along Dufferin between the intersection to the Mall and Croatia Street rather than the putzy little patch currently located on the north side of the entrance road from Dufferin to the main Mall entrance. At least, then, we wouldnt feel so imprisoned by the six and eight storey buildings which, it is proposed, will abut the edge of Dufferin Street.