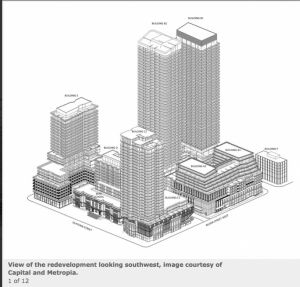 the future corner of Bloor and Dufferin

The community group working for a better "community hub" element is here: https://buildbloordufferin.ca/

None of the artist renderings show the tall towers except as background (cut off).

Here's a letter from Gladstone Ave. resident Joe McAllister about the most recent twists and turns in the Bloor/Dufferin development saga, with some commentary on the Wallace plans and the Dufferin Mall plans as well.

A decision letter was sent out after a pre-hearing telephone conference on April 18, 2019

Excerpt: Andrea Adams, one of the representatives of Build a Better Bloor Dufferin, expressed a measure of exasperation that the Appellant did not consult with her organization prior to preparation of the upcoming re-submission and she indicated the clear expectation of her organization that they be part of the ongoing discussion regarding modification of the development proposal.

Ms. Kovar [lawyer for the developer] undertook to ensure that the resident organization would receive the complete re-submission package, being drawings and supporting reports, as those items are submitted to the City. Daniel Elmadany, counsel for the City, did advise that all of these drawings and material in support of the application submitted by the Appellant is uploaded to a page on the City website and fully accessible by the public.

[10] Ms. Adams also requested that her organization be included in the discussions and negotiations as they are proceeding between the Appellant and the City so that they have a fair opportunity to understand the changes and provide their input on those changes. In the interest of facilitating the resolution of the issues regarding the application, the Tribunal commends this request to the Appellant and the City. [ed. highlight]

The city's file showing the revised proposal is here.

"The new school that will be will replace BCI will be smaller than BCI with a capacity for fewer students-this despite the fact that all the new developments will increase the population in our neighbourhood-including children who will need schools. It's difficult to discern the school board's motivations....."