Just a question about the playground reports. I noticed in the RVBurgess East reports that they mentioned all these suggested repairs to the wooden playground in 1999. I have a feeling that the repairs weren't made and that instead they just removed it and left a big gaping hole, which is what we have had since 2003. Is there a way to figure out if they made changes or if they just took the whole thing out? 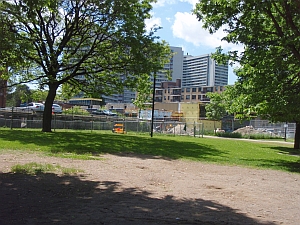 "it is just a sandy hole now"

Basically they took one park and then divided into 2 for the sake of the pictures and your report. The swings in the east part are still there (we saw them), but the playground is not, it is just a sandy hole right now. Anyways, the point is, it was good to see the pictures and realize that there used to be quite a substantial playground there and it was removed and not replaced, despite the increase in density and number of kids using the park!

We got a 2003 spread sheet through Freedom of Information, about the playground CSA repair/ replacement program. The 1999 audit called for $2060 to do repairs to the Jenner Jean Marie C.C. playground (connected to their daycare?), plus $6,900 for "RV Burgess East" and $2930 for RV Burgess West. It shows that no work had been done by 2002, but then the $2930 allocation for RV Burgess West had been reduced to $0. It looks as though they had scheduled the other two "repairs" for 2002.

Wow, this is very interesting information! By contrast, another old playground in Leaside (a much more politically and economically active region of our electoral ward) was pulled out this year and replaced with a new structure in 6 months. From what I can tell from the old pictures and what we currently have, the 2 other repairs to RV Burgess West and JJMCC playground (part of the daycare) were completed.

I am writing to discuss some concerns I have with the recent plans for RV Burgess Park. There is definite progress being made by PFR to beautify the park, improve the paths and provide more shade and seating. However, one of the main issues, play equipment, has still not been addressed. In the survey we completed with PFR which surveyed 167 residents, play equipment was the number one item that respondents thought was missing in the park.

We had hoped that the climber could be reinstalled on the green pole but were told that the price tag was too high ($15 000). The waterplay has been upgraded but the playground that was removed around 2002 has not been replaced (please see attached photo of old playground). The only hope we have been given is to wait for 2014 (12 years after the playground was removed) or raise our own money to buy our own playground. Is there really nothing else that can be done? Is there anything that you as our councillor can do?

The playground survey that we completed with PFR found that:

- Swings are the most used component by children 0-12 years

One small measure that would help the residents of Thorncliffe THIS summer would be to put back 2 swings that were removed around 2002. In the attached photo, you will see that this swing bay in RV Burgess originally had 6 swings around 2000. 2 were removed due to new CSA regulations in 1999 that stated new minimum swing distances. However, the CSA regulations state that:

Putting back these 2 seats would be an extremely cost effective way of giving residents what they most value in the park, more play equipment. I know that this has been done in other City of Toronto Parks. We have already approached PFR with our request and were told no, so I am asking that you as our councillor look into this.

We appreciate the work that has been done and is promised to improve the park and don't want to take that for granted. However, I really want you to understand that for a community with only balconies and NO backyards or cottages or money for vacations, RV Burgess Park is one of the only options that residents have for recreation, leisure and connection with nature and neighbours.

I would very much appreciate an opportunity to discuss this with you in person or over the phone as there was no time at the public consultation to bring up these issues. I have also written you two emails about the proposed new paths for RV Burgess and am awaiting your reply.

Thank you for contacting me as you have done to make me aware of your thoughts with respect to the RV Burgess project.

If there is one thing I emphasize each time the matter comes up for discussion, there is absolutely no budget in place for the purpose of making improvements to RV Burgess Park.

What we are trying to do in the present exercise is (a) develop a vision for where we would like to go if money could be found to do it, and (b) do the things we can actually find money for.

Accordingly, we have to expect that things won't necessarily get done in the order of our wish list priorities; they will get done in the order in which we can find the required money. Any money that gets spent will have to be applied in accordance with the purposes for which it is authorized.

That means that, if Kiwanis provides money for a stage, we will be able to build a stage. If the Clean and Beautiful Secretariat provides money for trees and shrubs, we will be able to plant trees and shrubs. But we cannot take money that is provided under a particular category and reapply it for a different category that we might regard as more urgent.

Happy to get together with you to talk the whole thing through more fully if you like.

Also happy to hear your thoughts with respect to pathways.

Amy, as always, I appreciate the initiative that you and your group have taken in this matter, and the energy you have all put into it. I certainly don't want anyone to get the impression that the City - be it me or Parks and Rec staff - is motivated by anything other than a desire to make the park as valuable as possible to the Thorncliffe community. If time ran out at our last public meeting before things could receive a full and satisfactory review, then by all means let's get back together and keep talking.