There were picture boards at the front of the room, showing maps of the current park and proposed re-designs, plus pictures of design features in other parks.

Inna Olchovski, a City of Toronto landscape architecture coordinator, gave some suggestions for possible changes to the park. She said the playground will have rubber surfacing in order to comply with the accessibility rules in the 2005 Accessibility for Ontarians with Disabilities Act AODA. Wood chips are thought to be a problem because they get into the splash pad and clog the drains. Sand is not considered acceptable as playground surfacing because it blocks wheelchairs -- although one resident spoke about how much his kids love to play in sand. Inna emphasized the need for flexibility in the park's re-design, since much may change over time as more people move in, including more seniors. She showed new areas of hard surfacing on the plan, to replace grass that could be trampled, and suggested that the Friday market could be relocated to a new hard-surfaced area.

A resident asked about getting a park washroom. Joe Ferrara, capital projects senior coordinator, said that a washroom is not in the plan because it would cost $600,000 and the money isn't there. Two residents said it was better not to have a washroom, although they didn't elaborate.

Joe said that funds for a park washroom would have to be raised privately. A resident questioned why $100,000 allocated for RV Burgess in 2016 hadn't been spent where it was allocated. Capital projects supervisor Mario Pecchia said that just because RV Burgess was listed for a certain amount on a capital projects spreadsheet didn't mean the money would be used there, because funds are needed all over the city.

City councillor Jon Burnside said that some of the money had been spent for park improvements at Flemingdon Park, since that project cost $550,000.

Park staff and Capital projects staff emphasized that they feel that even if not all the funding is in place for the proposals shown on the picture boards, it's still important to have the whole plan ready before starting any improvements. At this point, they said, there is not enough money in the budget to pay for everything in the plans pictured on the boards -- "the plans you see here would cost between $2 million and $3 million." But, they said, it's not good to make a plan only for the funds that are available. "Without an overall plan, you don't know where you're going."

CELOS comment: this "plan far ahead" style is one approach to public architecture, but far from the only one. See for example the Lighter, Quicker, Cheaper movement gaining ground in many places. Or there's the experience of Dufferin Grove Park.

Staff said that there will not be another meeting for community discussion until the city hires a landscape architect to draw up proposals based on the information from this meeting. These proposed plans will then be presented to the community "so people have something to talk about -- if we were to come to you with no plan, we would be sitting here just talking."

CELOS comment: Sitting and talking is exactly what's missing here. For planning staff to come in with posterboards of possible blueprints is premature. Staff could begin by asking, not suggesting. The best way for staff to learn how the park works and what people feel is missing, is by visiting the park often and sitting and talking with people.

A resident raised the problem of parents getting into arguments over swings, because there are not enough in the park for all the children who want to play there. Joe Ferrara said more swings could be added to the plan but then some other elements may have to be removed from the budget. A number of residents asked about more seating, referring particularly to seniors, and staff said that even more seating than was pictured could definitely be part of the plan, but with the same drawback, of other features being lost. Staff mentioned chess tables several times. Two residents said chess tables are okay but they were more interested in benches for conversation or just relaxing, including benches in quieter parts of the park.

Joe Ferrara said that this is the kind of thing they need to find out. This meeting, he said, is "about staff gathering as much information as possible."

At one point in the meeting a number of people were expressing irritation with the city. Parks supervisor Dennis Dametto said that the public consultation process the city is undertaking with the R.V.Burgess residents is "quite unique."

CELOS comment: community consultations of this type are common all over the city, not unique, and they have taken place about RV Burgess before. See for example this city presentation from 2009. But that doesn't mean they work out well for residents.

Joe Ferrara said "we are moving forward all the time" and he urged residents to email him to give him more information as they think of things. Dennis Damato emphasized "we're definitely here to listen."

To address a resident's concern that people would be taken off guard by unexpected changes made too fast, Joe Ferrara said: "this is not happening for three years, guaranteed."

A resident said she had her doubts about the process because she had gone to similar meetings where "people say things and then what comes doesn't have anything to do with it." ''

CELOS comment: She's right, of course. Her comment is repeated in many parts of the city, to the point where "community consultations" are often seen as a kind of charade. If staff are unaware of this problem, they could talk to Friends of Christie Pits, or Friends of Regent Park, for starters.

Staff said they don't think that would happen here, nor did they agree that it happens elsewhere. "Let's be positive." "We're here to listen." Councillor Burnside: "this is a collaborative thing."

Staff from Thorncliffe Neighbourhood Office asked whether there could be some local youth hired when construction gets underway. "Could local youth be trained as general laborers in landscaping, so that the community gets the benefit? We're ready for jobs." Staff said they were doubtful that could happen, because of labour rules.

A resident suggested that the rubber surfacing would not last long, but Dennis Dametto said the technology has improved dramatically.

Joe Ferrara said that the consultant will present residents with two different styles of playgrounds, modern or traditional, and the city will ask the community to choose. None of the choices will satisfy everyone, he said, but his aim is for everyone to be "comfortably dissatisfied" by the result rather than really unhappy about any element. "We have to balance all the competing demands."

CELOS comment: one common message staff gave at the meeting was one of scarcity. They want residents to be prepared to not get what they think is important because it would cost too much or be against some rule. 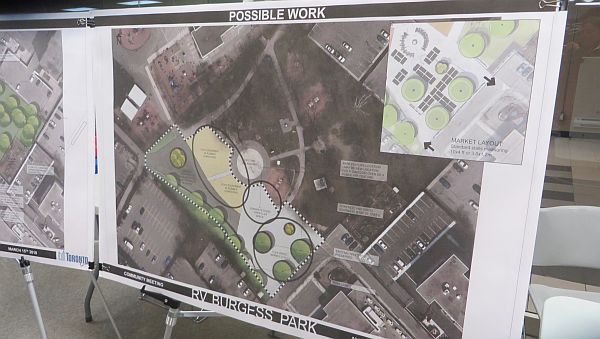 posterboards with plans already drawn up

The official summary of the meeting,sent around by the city councillor's office, is here.