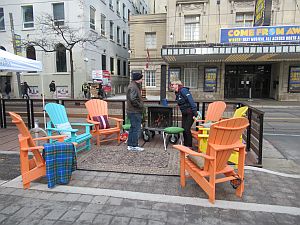 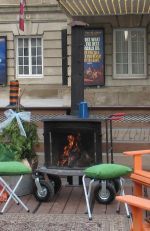 On four Wednesdays before the holidays began, Park People ran pop-up social spaces along King Street. City of Toronto staff took part too, and presumably funded the effort. Portable decking units with railings were rented to hold a nicely-arranged fire circle around a wood stove, plus an awning with a grass rug for a choir and a board games area. 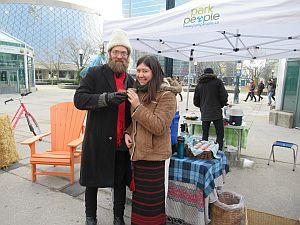 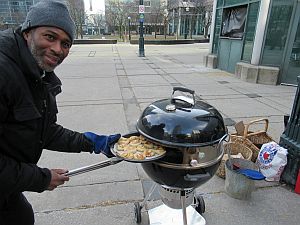 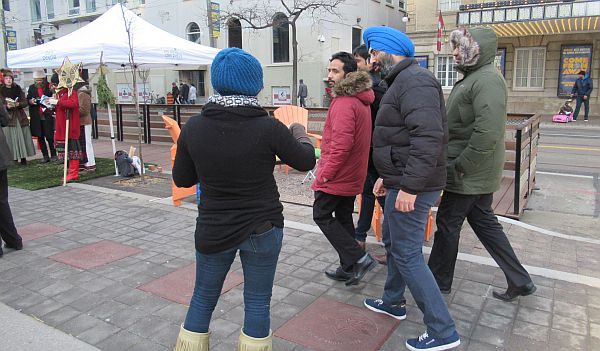 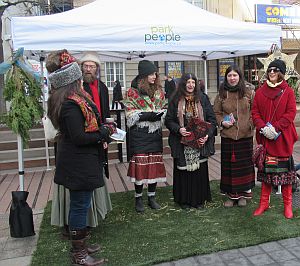 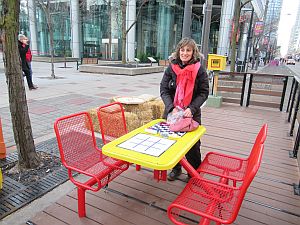 City of Toronto Transportation staff setting up board games

The BIA didn't want to spend the money to rent the fenced decking, so the Public Realm section of the Transportation Division stepped up.

The basic problem, however, as with most "pop-ups," is that the event didn't manage to divert many people from their original intention. In this case their intention was to go to the restaurant where they had already decided to have lunch and talk with their colleagues. Most people declined sampling the food, unless they were with small children, and even those little groups mostly kept on walking, pastry in hand. During the 25 minutes I was there no one sat in the chairs by the wood stove, though it was beautifully set up, even with a woolly blanket ready to drape over chilly knees. If anyone thought, walking by, that they might plan to come back the next day and eat a fresh-baked pastry and drink cider by a wood-stove, play a board game or listen to a choir sing some unfamiliar carols, they would have been out of luck anyway. A pop-up like this comes for one day, to advertise the concept of sociability but not to do the slow work of helping familiarity -- sometimes even friendship -- to grow among strangers.

It would be an odd but interesting experiment to locate such an area for a season, with one staff person only, friendly and brave enough to engage visitors to the square or people living or working nearby (presumably mingling with a few homeless people). A tricky task....