August 12. 2010: This was a tiny playground that is in one of the smallest parks in the city -- really just the edge of a building lot. It will be interesting to see how $100,000 can be spent there. The small toddler playground has been removed, leaving only the drinking fountain standing. Concrete curved low walls are being poured.

September 4, 2010: it's done, and it went almost $20,000 over budget. The main cost appears to have been the construction of the little retaining walls.

May 17 2013: the CBC reported that an outdoor gym in Dartmouth N.S., bought from the same company, had to be removed because pieces were breaking. By then the company had folded. 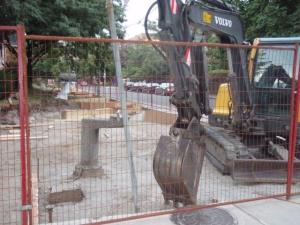 corner of Huron and Cecil Streets 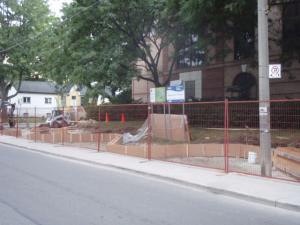 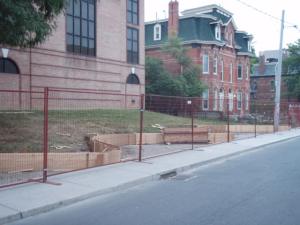 On Thursday, September 2nd, Toronto Mayor David Miller and Councillor Vaughan joined members of the community to celebrate the life and work of Julius Deutsch with a sign unveiling. Also present at the ceremony was a special guest speaker, Bob Hambly, the life partner of Julius Deutsch.

Julius Deutsch was a respected social justice activist who worked diligently on many labour issues and bringing equity to Toronto's many diverse communities. Deutsch encouraged local unions to create green jobs and organized the 'Good Green Jobs for All' conference bringing together union workers and environmentalists to work together to ensure a sustainable future.

This parkette is currently being renovated. The old playground is being replaced with exercise equipment designed for parks, geared in part to the large number of seniors in this neighbourhood. 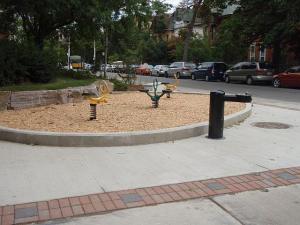 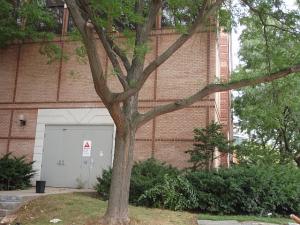 The park is beside a hydro substation 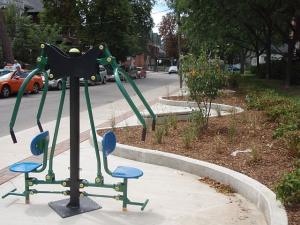 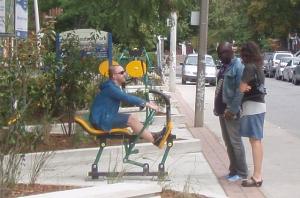