How the park looked before renovation May 2 2009.

Sept.4 2010: This park is the width (and depth) of two houses. A curved cement walkway has been poured. As of September 4, the park looks complete (i.e. fully landscaped) but without the features listed in Councillor Vaughan's newsletter (see below). A puzzle.

The councillor's website still has the pre-reno information on it: Park was named in 2005 for Sally Bird who was a local resident who was active in improving her community and was instrumental in having the parkette created on the former site of an auto body repair shop.

April 12, 2014: This park looks long finished but it didn't get all the things that were promised -- the waterplay features seem to have been replaced by a rather imposing black metal fence with double gates leading in from the laneway.

A blogger discovered the park by accident and wrote this. 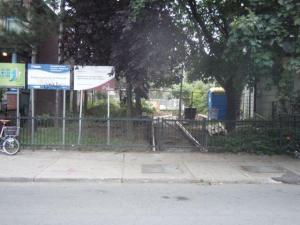 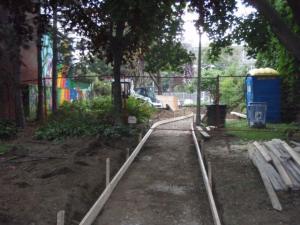 forms for the walkway 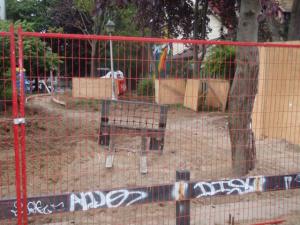 view from the back lane 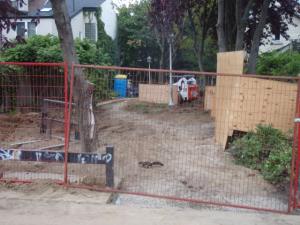 a portable toilet for the workers: it's the law 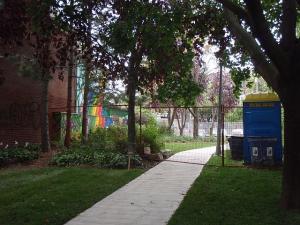 The sod is laid and the beds are planted 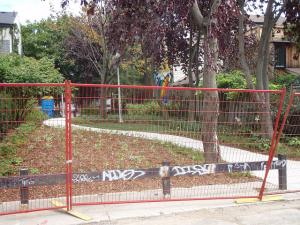 Under the regulations of this funding, the money must be spent by March 2011 on improvements to the play area at this park, and cannot be used at any other location.

Safety and cleanliness where the major concerns that the residents who attended the meeting expressed about Sally Bird Park. Community members felt that the park would benefit from better lighting, more appropriate seating and unique play features such as a sprinkler system that could be enjoyed by children when wading pools elsewhere were closed or adult outdoor exercise equipment.

Based on the initial feedback received at this meeting, Parks, Forestry and Recreation staff with the help of a landscape architect will develop a design concept for the park for feedback early this year.

If you would like to participate in the reference group that will provide ideas and feedback for design, please contact Dale in my office...

As you may have already heard, Sally Bird Park (on Brunswick Ave) has received infrastructure funding through the Recreational Infrastructure Canada Program (RInC), funded by Federal, Provincial and Municipal governments.

Though unexpected, these funds have provided the opportunity to bring positive changes to this green space that will benefit the Harbord Village neighbourhood. I am looking forward to continuing to work with local residents to ensure the changes made reflect the desires and needs of the local community.

In December, I hosted an initial consultation meeting about the redesign of this park. In the mean time, City staff from Parks Forestry and Recreation has been putting together a team, including a landscape architect, to develop a draft design based on the initial input received from local residents.

At the meeting in December, the key items identified to guide the design process were focused on improving the safety and usability of the park. Several specific suggestions were made that included:

 addressing the sight lines to the rear of the park

 introduce a water play feature to draw children to the park

Come out to review the draft design and provide feedback.

The fences and the chemical toilet are gone, but there's no sign yet of any of the adult exercise equipment or children's waterplay structures. 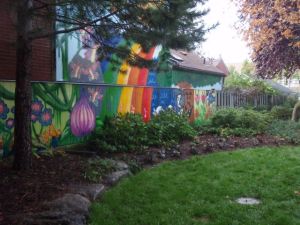 The mural from before is stil there 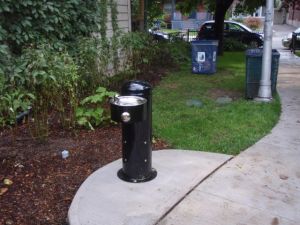 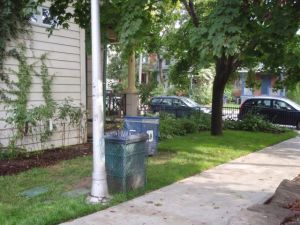 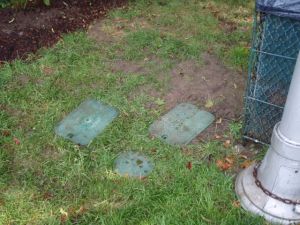 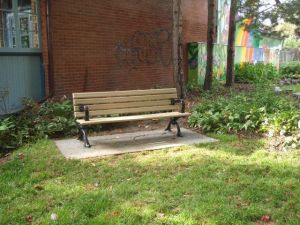 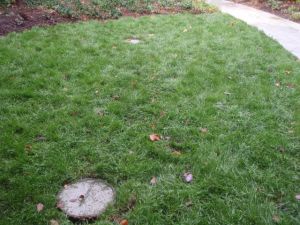 two cement footings in the lawn -- for the exercise equipment? 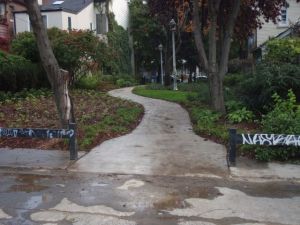 Although there is no one in the park during our visit on a warm day in early spring, the exercise equipment shows signs of use. There is a very imposing gateway into the back of the park from the laneway. There's only one bench in the little park, and no evidence of any waterplay features. Some tulips are coming up, though. 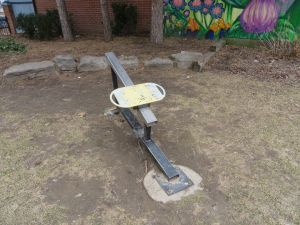 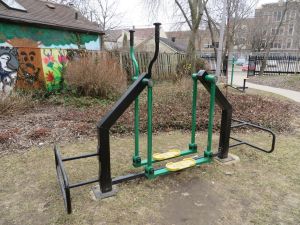 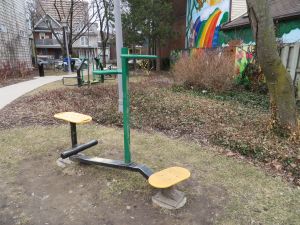 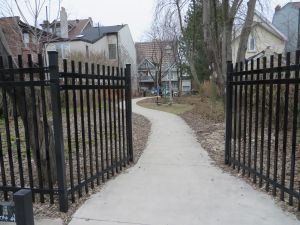 grand gates into the back

None of the equipment has a manufacturer listed on it. But the city's Stimulus Fund playground list says the supplier is Green Gym. That may be a problem if any of the equipment needs repair or replacement. Untypically, the company is Canadian instead of a large multinational -- but it folded in 2013.