Right up to election day, CELOS will be asking the councillors specific questions about "little things" relating to parks and public spaces in Ward 18, and publishing their responses.

What's your position on city staff collaborating with park users when public funds are being spent for repairs or renovations to public facilities? Are you aware that City Council passed a non-consultation policy last year http://www.toronto.ca/legdocs/mmis/2010/ex/bgrd/backgroundfile-26065.pdf, regarding spending on Stimulus Funds projects AND state-of-good-repair projects? (That can include even million-dollar projects.)

Here is one example of what this means in practical terms in Ward 18: 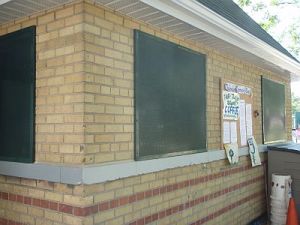 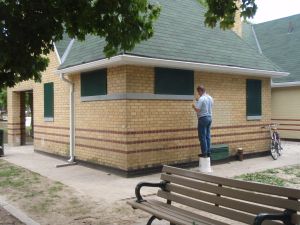 The MacGregor field house Stimulus Fund renovation includes virtually boarding up the windows, NOT because of vandalism but because of a design error. This is what can happen when there is an explicit policy of not working with park users. It will make the building much less useful for programming and for community events.

Could you send your comments about this non-collaboration policy, including what you would do to remedy this bad consequences of central rather than local control, I'll post whatever you send.

I'm aware of the "non-consultation" policy, but I will confess I believed it was meant to streamline the process rather than shut out community consultation. Nevertheless, my position on consultation is that it should be ongoing, regular and to some extent formalized by our city councillor. That is my intention anyway.

With regular consultation our city councillor won't be working at cross purposes with the community and park users and will, I believe, be more in tune with what is needed, when and how. The bottom line is that it takes experience and leadership to work with the community and not to fear that some one else, or some group, might have a better answer!

I had the opportunity to spend three days in New York in 2009 at a Project for Public Spaces seminar and let me tell you, it certainly changed the way I look at parks, streets, buildings and the urban landscape in general. If I'm elected as our city councillor on October 25th it is my intention to spread the "PPS word" across the ward and work with neighbourhood activists to identify, evaluate, plan and develop our parks and public spaces into safe, attractive and welcoming "destinations".

Community engagement is key part of my campaign, and I disagree with the non-consultation policy that was adopted last year. For too long, weve elected politicians that act as if theyre City Halls representative to us, when they should be our representative at City Hall. If Im elected, Ill change that by making sure that Ward 18 residents become fully included in the decision making process.

The residents of Ward 18 will always be able to count on me to engage the community and then make decisions that are best for the Ward 18. My decision will be based on the valuable feedback and input I get from residents. We will plan, discuss, decide and implement together. Furthermore, the same effort made during the consultation process will be demonstrated when explaining how and why certain decisions were made.

This is why Im committed to:

I live across from a park and I see first hand how important it is for youth activity and quality time spent for families. I will work hard to not just preserve our parks but together in cooperation with the residents we will work hard to enhance them.

Residents and parks users want to know that the city will support our activities and our vision for our parks, rather than trying to make us conform to a bureaucratic, centralized one-size-fits-all management philosophy.

The councillor has a responsibility to consult with the community, but it goes further than that. City staff must also welcome input from the community and exercise good judgment in applying that input. The common goal must be parks facilities that are welcoming and useful to the community, serving as many possible uses as we can identify.

The non-consultation policy is contrary to this goal. If there are deadline issues, the best approach is to let the community know about them from the beginning. As long as the project serves the community, we will naturally cooperate to achieve results.

Your question reinforces the need for strong local representation. As the local councillor, I will work with the community and other councillors to ensure that the policy be reversed, and that proper public notice and consultation be a requirement in all project

Parks are our gathering places, the many hearts of our community. We talk with neighbours, play sports, fly kites, have picnics and make friends here.

We have the right to shape how our parks feel, look and function, and we must collaborate effectively to:

- communicate with local residents, businesses and park users in as many ways as possible (online, in person, by phone, a newsletter, and in different languages) and create a collaboration loop to continually capture feedback and ideas

As Councillor for Ward 18, I will ensure that the residents in our communities are at the table. The plan will include a collective assessment of the park needs, determining priorities, and planning for today and for the future. For example, most people in our community agree on the timing of park renovations - it's best when renovations happen during equipment's off-peak use periods. If that is not possible then we need clear communication regarding what facilities will be affected and reasonable, practical alternatives.

Incomprehensibly, in 2009, Toronto City Councillors decided to deny public consultation with regard to all "State of Good Repair" (SOGR) projects. This shocking decision shuts down community input into priorities, changes, or modifications of facilities related to Parks, Forestry and Recreation.

This circumvention of democracy, this blocking of public involvement, was deemed necessary to ensure that projects are completed quickly and within a fiscal budget. In my opinion, expediency at the expense of local involvement is the exact opposite of citizen expectations and assumptions.

Community involvement is most needed and most appropriate at the exact point when infrastructure comes due for renewal or redevelopment. At this precise time, City officials, community reps and invited consultants have an optimal opportunity to examine facilities and decide how community needs have changed, demographics have changed, and how to redesign infrastructure for coming decades.

By shutting out community leaders at crucial junctures in the life of facilities, the City is blindsiding itself to its most precious resource - its own citizens! If elected I will work to change this ordinance as fast as possible before more money is wasted and before more damage is done to community morale.

As a candidate for city councillor in ward 18 and someone who lives very near MacGregor Park, I am glad you are raising this issue.

My experience with the city, through regularly watching city hall meetings and making deputations, is that we have had a culture where democratically elected political representatives defer to the bureaucracy in decisions that are made - frequently without any opportunity for public input and ideas. Where constituent input is sought, it is usually an afterthought or to sell what has already been decided or heavily influenced by unelected sources.

We often hear politicians praising the city staff. I first thought that was from a need to motivate, to recognize their efforts and instill team city pride. Though that exists and is right and good, I still wonder how many city councillors fear the big bureaucratic machine, do not understand how things work or would rather find scapegoats when things don't go well?

In my view, previous city councillors wrongly sought political values-based leadership from public servants whose role should be only to advise when asked and to implement when directed. Providing representation, vision and leadership is the job of your city councillor. That requires that a responsible city councillor ensure that public input is paramount. Knowing what the local neighbourhood values, needs and wants is the key to ensuring success, acceptance and innovation.

Bureaucracies seek to make things the same across the city - to centralize and make control easier on a grand scale, often to promote success on a big budget basis. Yet, sameness is the enemy of innovation. We should not fear change and new ideas, to harness truly local initiatives, brainpower and resources. What works in one locality may not be right for another.

As your political representative, I would ensure that:

1. You know what is going to happen before it happens;

2. You have, early on, a real forum to voice concerns, suggestions and questions;

3. Your input would significantly inform decisions made;

4. I would explain why decisions were made with full disclosure wherever possible. Further, I want to be open to having my mind changed before decisions are made in your behalf. We need to work together.

City councillors need to do things WITH us, not do things TO us. Recind the non-collaboration policy.

First let me say, I believe that residents should have local control of their parks.

The City seems a bit confused about this. It has people and equipment so as to meet the needs of actual residents, and knowing what residents want for their local park is basic to planning any work to be done.

Moreover, it can be costly and wasteful to proceed without consultation. Who knows, much of the proposed work might not be what residents want - or, they might want it done off-season.

They might also prefer to do it themselves, over a few weekends, and use limited City capital only for new facilities. The absolute right to do so should be clear.

The City should certainly respond to requests, helping users decide what they want, but should not be coercing outcomes, or refusing to hear what park users need.

Further, although the City has classified state-of-good-repair costs as requiring no resident input, the MacGregor Fieldhouse shows that, even in cases where basic structures are being repaired, not replaced, extensive work will introduce numerous changes, as well as program interruptions.

The results at the MacGregor Park Fieldhouse are not pretty.

The new 'security' screens, which block light, and prevent windows opening fully, can be removed easily with a screwdriver. The new one staple door bolts can't be locked open, and the new doors have no sills. The new home-style eavestroughs are already clogged with leaves, and one side drains toward the playground sand nearby, which was formerly soft, but is now packed and damp, with building materials in it. The drain point is two feet from the foundation wall.

The newly poured ramps into the washroom doors are rough, with odd slopes and patches. The washroom floors have embedded grit, and don't drain well.

Close and early rapport with park users might have caught these problems early, showing how local control and disclosure can reduce capital budget requirements.

Finally. deciding to ignore residents took so long, we could have been exhaustively consulted instead, so when money arrived, the City could start work at once - with no delays. The assets which need repair are known - that's how the capital budget was estimated - and work will occur over the next 10 years.

There's plenty of time for consultation - and consultation is necessary, even when it comes to maintaining state-of-good-repair.

As councillor, one of my foremost concerns will be to restore local resident control of our parks and City, creating more responsive, affordable government, and eliminating bureaucratic overheads.