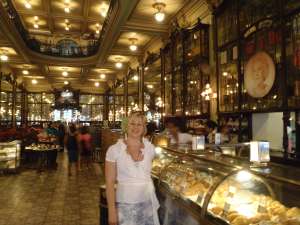 Recently I spent an afternoon with the artist Claudio Montagna in his studio next-door to the beautiful Confeitaria Colombo in the Central district of Rio de Janeiro. Claudio studied for 10 years at Parque Lage in the Escola de Artes Visuaise. This beautiful structure was built by a rich businessman as a performance space for his wife the opera singer Bezanzone Lage. Now it is used as an atmospheric location for music videos (Snoop Dog) and film shoots, as well as for the art school). 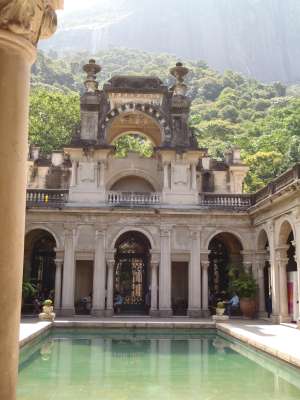 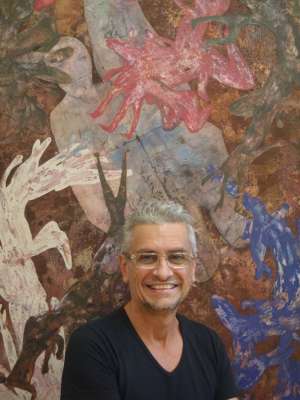 Claudio Montagna with Work in Progress

Claudio has four pieces of his work in the Museo de Arte Moderna, part of the Gilberto Chateaubriand collection. Right now he is preparing for a major solo show at the Centro Cultural da Justica Federal and wanted me to go with him to take a look at the space. One of Claudio's many jobs is a tour guide in the city, and as we walked along the central boulevard I benefited from his wealth of knowledge of the history of Rio as well as the history of art. The thing that Claudio loves most about his city is all the different atmospheres created with the juxtaposition of architectural styles. Rio has the largest collection of cast iron sculptures outside of Paris, France. We pass colonial buildings with elaborate grille work on balconies and entranceways, next to hyper clean lines of Art Deco from early last century. 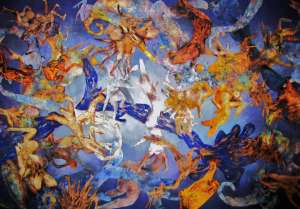 The Central Cultural da Justica Federal is one such a beautiful location, with an elaborate Art Nouveau stained glass window depicting Justice holding a balance standing behind an elegant curved staircase leading up to the second floor. Claudio will have all five rooms for his show 'Vida Liquida', a total of 300 square meters.

The title refers to 'Liquid Life', a book by Polish sociologist Sigmunt Bauman who talks about the contemporary fear of becoming nobody, a loss of individuality in a sea of humanity. A play on words 'indivisibility' and 'individuality', being just one more anonymous person in the middle of everybody else. As Claudio points out, there are no heads on his figures. Starting with bodies that are highly manipulated and perfected, he goes towards anti-photoshop, less perfection and in the direction of plasticity, fresco and paint.

As much as Claudio loves to talk about art he also believes that art should not be over explained. 'It is just feelings as they cross my mind and it is only after I finish that I think about what it is about. When I'm in the middle of it I'm not thinking at all.'