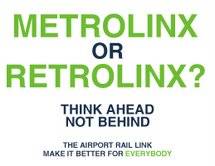 They (the Weston folks) may be right. I did a little Google research, starting from the Metrolinx FAQ ( http://www.metrolinx.com/gsse/FAQs/default.aspx) and then looking for definitions of the "2010 Tier 3 Environmental Protection Agency emission control requirements" mentioned there. From what I can tell, Tier 3 may be inadequate and Tier 4, a much more stringent standard, already exists. I don't know if locomotive engines are already being built to Tier 4 standards though.

Metrolinx does say they are planning to electrify this train route at a later date, but I question whether saying that simply excuses them from going for the higher Tier 4 standard now.

Currently, GO trains are powered by older diesel-electric F59PH locomotives (1988, the "electric" part is not for locomotion but for lights, heat, etc) that do not meet Tier 3 standards.