L. K. has printed 10,000 postcards with a message to the Premier regarding the Metrolinx diesel train proposal. She has left stacks at The Gladstone but there may be other pick-up and drop-off locations as well, should you wish to participate. 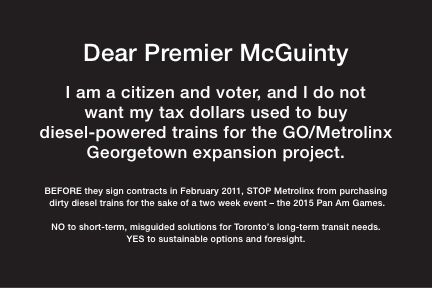 I hope you are not too burnt out from my previous emails about the trains. I realize some of you are thinking 'What is she on about?'. Well, this is the last correspondence that I intend to mass email regarding the trains. I feel very strongly that this is one of those issues that hits you in the future and you are left wondering 'How did this happen?' I am sick of bitching about this stuff and decided to put my money where my mouth is.

I have designed and paid for the printing of 10,000 postcards with the hopes of getting you, my fellow Torontonians, to participate in a campaign to motivate the provincial government to stop the purchase of diesel trains for the airport link between Pearson and Union Station. If you've read the other emails or are familiar with what's going on, skip to the bottom of the page where it says HOW CAN I HELP?

In February 2011, Metrolinx (an agency of the government) plans to purchase diesel trains that will run along the Georgetown corridor to the airport.

WHY SHOULD I CARE?

Metrolinx and the Province plan to run over 400 diesel trains a day through neighbourhoods from Pearson Airport to Union Station such as Queens Key, Trinity Bellwoods, Liberty Village, Parkdale, the Junction and Weston to name a few. Diesel exhaust is a known health hazard that has been linked to cancer and respiratory diseases. The particulate matter from the diesel exhaust will not be restricted to this route. Studies have shown that toxins emitted from the trains can be carried by the wind as far as 200 miles, which will affect everyone in the GTA.

Studies have also shown that electric trains are the best option available for this purpose because they are better for the environment, can make more stops to service more people and will be cheaper to run in the long run.

1) Only one other city of the top 100 cities in the world  Dhaka in Bangladesh  uses a diesel rail link to their airport.

2) Diesel trains generate too much pollution when they stop and start so the proposed link will only have a few stops in Toronto (Weston, Bloor and Union Station). From a service standpoint, this is dismal. The trains will not be accessible to the majority of neighbourhoods along the rail corridor.

3) Metrolinx has stated that the air rail link will be a "premium" service with a ride costing anywhere from $25 to $35. Shouldn't the goal be to create a link that is the same cost as a ride on the TTC?

4) Metrolinx has claimed that they will not be able to electrify the train corridor in time for the Pan Am Games in 2015 as the main excuse for the need to buy diesel trains now. There has not been any hard evidence produced that substantiates this claim, merely speculation. Aside from that, the Pan Am Games is a two week event that can be serviced by hybrid buses running on dedicated lanes for the course of the games. A two week event should not be the basis for making a decision about Toronto's long-term transit needs. This decision will have reperucussions for years to come.

5) Metrolinx claims they will use Tier 4 diesel trains that will one day be converted to electric. Currently, Tier 4 trains do not exist. If they manage to get them designed, tested and on the tracks by 2015, they will still emit a lethal toxin called PM2.5 which is easily airborne and poses a serious threat to cardiovascular health. As well, electrifying trains in the future will mean a second round of costs, which translates into more of your tax dollars. Another question that comes to mind is whether the conversion to electric will ever happen once diesel trains are up and running.

HOW CAN I HELP?

1) You can send a postcard to Premier McGuinty. - the goal is to get as many out by January as possible

If possible, stop by my office and grab a postcard (or two or three) and send one to Premier McGuinty and pass the rest on to family, friends and neighbours. I am in the 401 Richmond building at the corner of Richmond and Spadina in studio 435.

If you can't make it here, I'd be happy to drop some by your place. I'll make a run once a week throughout the city. Just send me an email with the location and let me know how many you'd like: lisa@lisakissdesign.com

Passing along this information is very useful as well. There is also a petition on the clean air coalition website that you can sign along with relevant email addresses for various politicians.

For more information go to:

It's about our health, our environment, our tax dollars and about our city moving forward, not into the past.

Thanks for taking the time to read this!