You are on the [March 04, 2009] page of folder [Georgetown Expansion And The Air Raillink] 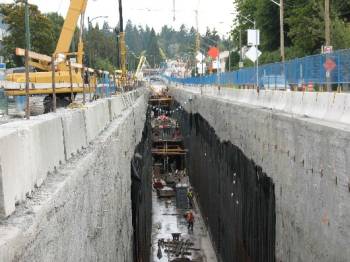 Just received an email from one of our friends out in Vancouver who has already had to suffer through the building of the Canada Line on Cambie Street in time for the Olympics. She almost lost her business, had to move, along with a number of others who have lost their businesses because of the construction and devastation to their street. They were told by the proponent who had government approvals, same one who will run our Air Rail Link, that they would be getting a buried line -- turned out to be cut and cover which is much more invasive. Government knew about the 'bait and switch'. No compensation has been forthcoming from either the province nor city for lying to the business owners who have lost everything -- one tried to kill himself just a few months ago. Susan is finally having her day in court -- she is a feisty lady!

The trial of a Cambie Street small business' claim for damages due to cut and cover construction disruption is scheduled to start in British Columbia Supreme Court on Monday, March 16, 2009. The action involves Susan Heyes Inc. doing business as Hazel & Co. (Plaintiff) versus the City of Vancouver, the governments of BC and Canada, Translink, Canada Line Rapid Transit Inc. and InTransit BC Limited Partnership (Defendants) and is filed under Action no. S054152 in the Vancouver Registry.

The Plaintiff alleges that the Defendants' actions, including misrepresentation and private nuisance, caused it business losses and seeks general, special, aggravated exemplary and punitive damages, interest and costs. None of the allegations have been proven in Court.

The trial is expected to last three weeks and hear testimony from a number of key government witnesses.

The proposed rail link to Pearson airport is by no means perfect but it has the potential to significantly reduce car trips to Pearson. It will also provide our community with a rapid transit link the airport via the Bloor West Go Station. This is a much underused transit asset that could be linked to Dundas West station to provide a vital transit hub servicing our wider community.

My understanding is that the province has made substantial changes to the original proposal including tunneling certain sections through Weston and providing a stop in that community. Also, there is a plan to electrify the route at some point. Of course it should be electric but currently dozens of diesel powered Go trains travel through our community daily.

I also suspect that, if the train is priced appropriately then many of the thousands of employees who work at Pearson will have a more convenient method of getting to work.

Rapid transit to Pearson also has the potential to undermine the Island Airport which continues to blight and pollute our waterfront.

The Pearson rail link is severely flawed but we should be supportive of rapid transit initiatives like these. We should be pushing to improve, not oppose this proposal.

There are still so many questions and concerns. I totally support public transportation - better for the environment, faster etc. Access at Dundas West would be perfect.

but If it will cost $35/person per trip who will use it? the public paid for the 407 but I can't afford to use it.

Yes we should be pushing to improve it!.Thanks for your initiatives and keep us up to date on how to improve it.

Note that it costs about $35 for a cab ride to the airport from dufferin grove. spin

Perhaps the bigger question is will air travel be available/affordable to we of the unwashed masses by the time the public link is built? I suspect we will be hit by the rapidly escalating costs of air travel, hence drastically reducing the demand/need for a link to the airport. We're approaching a new era in the global fossil energy consumption: rapidly decreasing supply caused by rapidly increasing world demand.

I'd place my bets on local development, on sustaining the integrity of Weston and spending money on that, at least until I had some clear idea that planners have taken these bigger issues into consideration.

Why 'should ' we support a transit system that isn't even trying to be as green as possible. And I highly doubt that this will discourage business people from the island airport from making those quick business trips it's probably still cheaper and faster than going all the way to Pearson. There are shuttles ferrying people all through downtown, no doubt right to there office tower. I'm tired of supporting things that come in nice packages. If it really will cost $35 one way where is the incentive for people not to drive or for a small family to just jump in a cab and be on there way.

I support public transit but why not listen to the concerns of those communities that will be effected by it. Why only take the project half way. And what sense does it make not to make it affordable to the masses?

Maybe a bike path to the airport is the way to go.

This seems such a tricky issue. Sounds like it certainly needs plenty of public discussion.

Re that it costs $35 to take a cab -- but not per person. If a family goes to the airport, a cab ride will be a lot cheaper, yes?

But the pollution part of it is also a puzzle, and the volume of trains. Then there's the prospect of such grim economic pressures, which might keep more people out of the skies (and the airport) anyway. Would that perhaps be all to the good? Does it make sense to focus so much effort on getting people onto planes so they can rip another hole in the ozone?

Let's not forget that presently you can take the TTC from anywhere in the city and then the "rocket" express bus from Kipling to Pearson all for the amazing price of $2.75 or a token! Why on earth should it go from $2.75 to $35.00!! Will this mean the TTC will no longer operate the route??