"The "giant flood" story is prominent in many cultures, including First Nations. Noah's Ark is just one of these stories, let's include the others. Why not put up a plaque type thing with mini-explanations of these stories next to the structures, and also explain that these were erected before Toronto had developed its multicultural policies, and that to tear them down is a waste of money that the city just doesn't have. I myself am a very secular, sceptical agnostic, and I think we should just relax and talk to our kids about stuff like this openly and informatively."

"I have seen the images and read the words the playground equipment in Christie Pitts park. I do not believe the presence of flood story on this equipment would represent a violation of the spirit of a secular park. In my opinion, the images and writings do not proselytize for Judeo-Christianity (no more than a depiction of Sendak's "Where the Wild Things Are" would promote animism) nor do they create a barrier for people of other faiths (I include atheism as a "faith") to enjoy the park splendour, such that it is.

My opinion on the matter of secularism is that a secular society is uniformly frictionless for people of all faiths. Sensitivity is required, however, this should not include the obliteration of any and all things that may be associated with one or more religions. Much of humanities cultural, artistic and literary canon is rooted in, or can be associated with, religious notions and traditions and provide a critical backdrop to pan-cultural understanding. In our verve for secularism let us not rob the park of its colour.

As pointed out by another "friend" of the Pitts, the presence of this story provides an excellent opportunity for parents and elders to contextualize the story for others. In this way the park will continue to evolve as a place where all cultures are miscible in all proportions."

You can't please everyone. The fact that only one parent has stirred-up "Dissent" shows how many people are unopposed to the equipment (or how many are apathetic).

I'm glad that common sense prevailed. Replace them when they wear-out, perhaps with the story of Purim ;)"

"Let's not limit our kids exposure to ideas and beliefs - let's teach them about everyone's beliefs."

"You raise a valid point Simone. I think too often we forget that acceptance and multi-culturalism are not about erasing all elements of religious life from public areas but actually openning up dialogue and learning opportunities for people to share across religions and culture - in essence embracing our plurality rather than denying it. We also shouldn't forget Canada's history and that Christianity played a large part in many of the good and bad developments throughout the growth of the country - and this cannot nor should not be erased from public understanding of history. This being said, the murals as they stand are neither inclusive nor educational and something should be done to change this."

I've enjoyed reading all your different points and I would like to just add my own perspective on this issue and I hope no one takes offence. I agree that Christianity played a large part in many of the good and bad developments throughout the growth of the country, but a depiction of the Noahs Ark story is not really a depiction of that history. Though I actually don't think a childrens playground would be the best place for an illustration of Christianity's good and bad contributions to Canada's history, such as residential schools. I also believe that too often Canada is depicted as a Christian country and society. Think of all the Canadians, First Nations and immigrants who are not Christians yet time after time are made to feel like they do not belong in the mainstream of our society. This is a large group of people in our community. I think that we have to find new ways to make people feel welcome and not alienated. I agree that it's a great idea to show not just Christianity but all religions. Unfortunately we know that it almost never happens, practically there is usually not time nor room to represent all religions, it just doesn't happen. I can understand how people feel that there are more important issues to work on and I agree but if this decision can make our park more inclusive and makes our neighbours feel more included then I think it is worthy of our time and I would like to congratualate Monica on her work to make our park and our community stronger and more equitable.

If we include all religions in a future playground structure I suggest to consult with Georg Muehleck, who now resides in Toronto. And, Simone, I am sure we could integrate your Buddha. 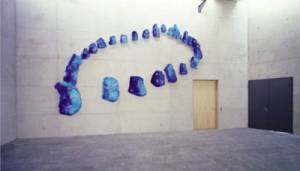 Georg created an incredible work inside of a cemetery chapel in a small town in Germany (Untergruppenbach  outside of Stuttgart) depicting all religious symbols past and present known to mankind and to the best of his knowledge  including the overall shape of the assembly reminiscent of a Viking ship that carried the dead to the heavens. 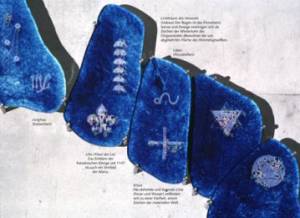 This work completed in the year 2000 however created almost the opposite effect in a small Catholic / Protestant town. Priests were calling for it to be removed and demanded a cross to be placed on the wall instead. Pamphlets of the work of art were confiscated.to the best of our knowledge it still is there today.

On May 30, Leslie Endes wrote:

I've been enjoying this thread of discussion.

We have a real opportunity to engage this debate in the real world. Namely Vermont Square Park which is due to receive a substantial capital funding ($450k) in the next 2 years. The Seaton Village Residents' Association is launching a Community Consultation process to decide on how to implement this money.

An 'Inclusive Sculpture' could very well be a part of it.