You are on the [Laneway Project] page of folder [CELOS (Main)]

Note: the invitation below was cancelled because of cold, rainy fall weather in the forecast. We'll try again on milder days in spring.

Last June, a report went to Toronto/East York community council, about allowing laneway suites (used to be called "granny flats" ) -- or garden suites where there is no laneway. In July, City Council approved a motion to study the proposal and address the necessary bylaw changes in 2018.

I thought it would be good to have a conversation about the issues and practicalities involved, at the same time firing up my low-cost temporary laneway pizza oven for some very tasty pizza.

Two of the report's authors, Jo Flatt and Andrew Sorbara, will be there.

Let me know if you're interested in coming by, and feel free to pass this invitation along to friends who may also be curious. (They should email me -- I just need to have an approximate idea how many are coming so there's enough pizza dough).

If you come by the front door, the address is --- Havelock St. If you come by the laneway, the garage will be open and sign-posted, with some tables set up for food and conversation, some source materials, wisps of smoke from the oven, etc. There will be a few stakes in the backyard to show the range of building sizes proposed in the report.

There will be kids around, and things to play with --

A 2008 article in the Star about granny flats, telling about Rohan Walters' unsuccessful attempt to get permission for a client: No room for granny flats.

U of T News: U of T experts' creative solution to Toronto's housing problems: laneway homes. 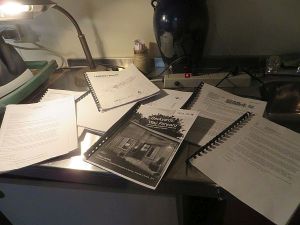 so many letters went to community council

My old friend Hedy, whose ideas re laneway housing are mentioned in the letter linked here, died in August, but she left me a little money to get help doing a few laneway pizza days. So this one is not a pitch-in potluck.

City Council received many, many letters, about 90% for and 10% against. The city clerk's office kindly ran off copies for me, which I spiral-bound into three booklets. They'll be there to look at on Oct.29.